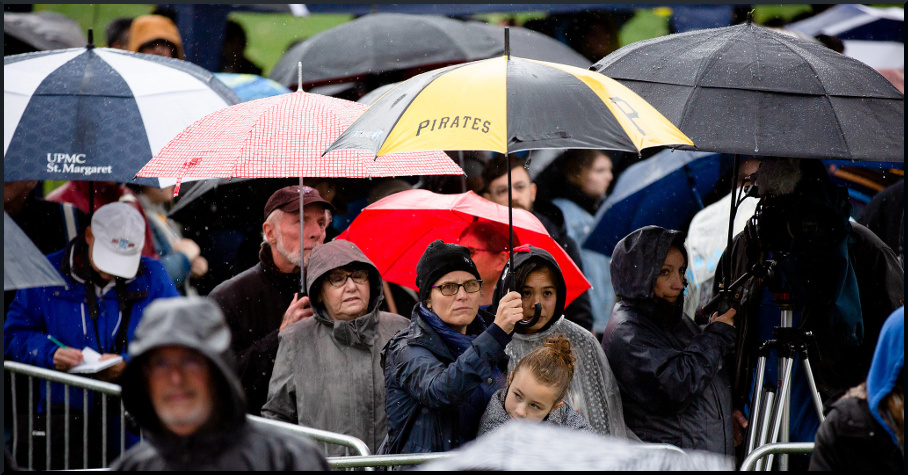 Homemade pipe bombs sent to prominent Democrats and Trump critics sparked nationwide fear and an FBI manhunt. The 14 bombs were sent to billionaire George Soros, former Secretary of State Hillary Clinton, former President Barack Obama, Former Vice President Joe Biden, actor Robert DeNiro, and others. One of the devices was delivered to the offices of CNN in New York City, causing an evacuation of the building.

As the FBI closed in on a suspect, rightists discounted the bomb plot as a “false flag” conspiracy. The search for the bomber culminated in the arrest of a Florida Trump supporter, Cesar Sayoc, who had posted angry threats against Trump critics online.

On Oct. 24, a white gunman, Gregory Alan Bush, executed two African Americans in the parking lot of a Kroger market in Jeffersontown, Ky. He had tried to gain entry into the predominantly Black First Baptist Church earlier in the day.

The week of rightist terror culminated in the mass murder at Pittsburgh’s Tree of Life synagogue. The shooter, Robert Bowers, who had posted anti-Semitic and violent sentiments on social media, shouted, “all Jews must die,” as he entered the place of worship. Bowers murdered 11 people and wounded six, including four cops who responded to the scene.

Unlike Sayoc, Bowers is not a Trump supporter and wrote that he thinks the president has been “too soft” on Jews. In recent weeks, Bowers posted messages on the social media platform Gab.com charging that Jews have facilitated “illegal” immigration to the U.S. On the morning of the killings, he posted that “HIAS [Hebrew National Refugee Shabbat] likes to bring invaders [i.e., immigrants] in that kill our people. I can’t sit by and watch our people get slaughtered. Screw your optics, I’m going in.”

Since Trump was elected, there has been an uptick in hate crimes and violence against people of color, Muslims, LGBTQI people, and immigrants. Trump’s racist, Islamophobic, and anti-immigrant rhetoric has fueled this wave of hate. His assertion that Democrats are financing the migrant caravan now crossing Mexico is the latest fuel heaped on the fire. Migrants fleeing poverty and violence caused by U.S. imperialist policy are scapegoated as possible terrorists and gang members.

The Soros conspiracy theory, which claims that the Jewish billionaire is behind protest movements, pays protesters, manipulates financial markets, and finances antifa (anti-fascist) groups, has been a staple of far-right conspiracy websites, like Breitbart and Infowars, and right-wing movements. Some reactionary forces believe that Soros himself is a tool of the Rothschild banking family, Jews who have been targeted by a conspiracy theory that goes back as far as the Napoleonic Wars.

Soros conspiracy allegations have attained mainstream acceptance in GOP circles as Trump and other Republicans have made assertions about Soros’ supposed role in paying protesters and financing social movements. Trump claimed, without evidence, that Soros had paid the “elevator screamers” who protested the nomination of Brett Kavanaugh to the U.S. Supreme Court. Trumpist Congressman Matt Gaetz tweeted the claim that the migrant caravan was financed by Soros, who paid migrants to “join the caravan & storm the US border @ election time.”

While Sayoc, Bush, and Bowers do not appear to be part of a coordinated effort or organized hate groups, activists should not discount the effect of their actions. The right celebrates them as heroes and “lone wolf” actors. The terror they foster is real. The actions of these individuals is reminiscent of the actions of Oklahoma City bomber Timothy McVeigh and others who were inspired by the “Turner Diaries,” a book authored by the neo-Nazi, Willian Pierce. The book is set in a future where the United States has been overthrown by a white racist revolution and describes how the revolution was sparked by a terror campaign. The “Turner Diaries” was cited by McVeigh as his “bible.” The book remains a popular item at gun shows across the U.S.

Proud Boys and other rightist thugs

Rightists in the United States are arming themselves, training, and preparing for violence. An outbreak of such violence took place at a pro-Trump “Make America Great Again” rally in Huntington Beach, Calif., in March 2017. The neo-Nazi rag, the Daily Stormer celebrated the event with an article headlined, “Trumpenkriegers Physically Remove Antifa Homos in Huntington Beach.” The violence was perpetrated by an ultra-right, white-supremacist group, the Rise Above Movement (RAM), headed by Robert Rundo, who also was involved in violent actions in Charlottesville, Va., and in Berkeley, Calif., last year.

Last week, Rundo and other RAM members were arrested by the FBI on charges that the men used the internet to organize their activities, coordinate “combat training” and “celebrate their acts of violence in order to recruit members for future events.”

Recent Proud Boy attacks in New York City and Portland are additional examples of the violent propensities of the far right. In Portland, on Oct. 13, Proud Boys joined with Patriot Prayer and other far-right groups in a “flash mob for law and order” to counter a memorial gathering for police shooting victim Patrick Kimmons. Police said that people carried knives, hard-knuckle gloves, and firearms into the melee that followed. Two days later, Portland police officials announced that they had found a stockpile of guns stashed in a parking garage near the scene of a Proud Boys action in August.

In New York on Oct. 12, Proud Boys attacked people who were protesting their participation in a meeting of a local Republican Party club. “Do you feel brave now, faggot?” a Proud Boy screamed at one of his victims, but police looked the other way during the attack. Although no Proud Boys were arrested at the time, three anti-fascist demonstrators were caught by the cops and charged with assault and petty larceny. (Later, after Democratic Party politicians asked to look into the matter, at least nine arrest warrants for Proud Boys members were issued by the police.)

Pro-Trump rightists, including Proud Boys and 3%er Militia, are currently mobilizing for a rally in Philadelphia on Nov. 17.

The Proud Boys, unlike some far right groups, avoid the imagery of the Klan or the Third Reich. Instead, they cloak themselves in a clean-cut style and avoid overtly racist rhetoric. They define themselves as “Western chauvinists” and admit people of color to their ranks. However, members of the group have appeared alongside neo-Nazis and fascists from Charlottesville to Portland. This operational unity in action is more relevant than their claims of not being racist.

Proud Boys founder Gavin McInnes has openly advocated violence against opponents of President Trump. “Fighting solves everything. We need more violence from the Trump people. Trump supporters: choke a motherfucker. Choke a bitch. Choke a tranny. Get your fingers around the windpipe,” McInnes said recently.

All supporters of civil liberties must repudiate the recent violence and bigoted rhetoric by the far right. Workers and the oppressed cannot rely on the capitalists’ police, courts, or politicians for protection. The Democrats’ call for a vote in the midterm election to stop reaction is an exercise in political futility. What is needed is mass counter-mobilization based on the mass organizations of workers and the oppressed. A united movement of the unions, Black and Brown organizations, immigrant organizations, the LGBTQI movement, and the women’s movement can stop the ultra-right in its tracks.

At the same time, workers and the oppressed must assert their right to organized self-defense through the construction of defense guards based on their mass organizations. This is not a fight that can be won by small groups of isolated fighters or by any one social group alone. Defeating the far right requires the building of a broad social and political movement. Advancing the struggles of the oppressed and exploited also requires the building of a revolutionary workers party to take forward the fight against this racist and criminal system.

Header Image: Pittsburgh’s Rally for Peace and Memorial for the Victims of the Tree of Life Synagogue Shooting ~ Flikr Pg of Gov. Tom Wolf, posted Nov 9, 2018