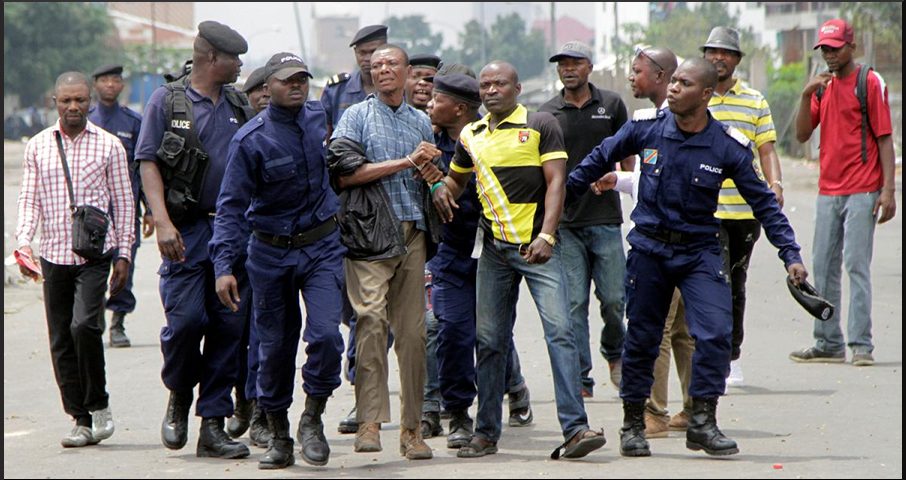 Congolese policemen arrest opposition activists participating in a march to press President Joseph Kabila to step down in the Democratic Republic of the Congo capital Kinshasa, September 19, 2016 ~Reuters

by Kambale Musavuli, Published on The Daily Maverick, 22 June 2018

The uncertainty in the Democratic Republic of the Congo (DRC) has garnered the full attention of regional and continental leaders. Congo’s electoral commission has set December 23, 2018 as the date for elections. However, it is not entirely certain that elections will take place. It is even less certain whether Joseph Kabila will run for a third term or choose a successor. 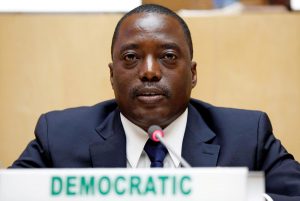 presidential mandate on December 20, 2016. The longer he remains in power without organising elections, the more unstable the Congo becomes, and the greater the risk of instability for its nine immediate neighbours and beyond. The instability generated by Kabila s hold on power has contributed to 13 million Congolese in need of humanitarian assistance; 4.5 million internally displaced; 7 million facing severe malnutrition; and 2 million on the verge of starvation. Although not imminent, a conflagration pulling in Congo’s neighbours cannot be ruled out. The organising of credible elections in December is seen as the most viable path to stability in the Congo and the region.

While Congo’s electoral commission has scheduled an election date, it has done little to reassure the Congolese people, Congo’s neighbours and the wider international community that elections will unfold peacefully, if they occur at all. Kabila has remained silent about his intentions while his supporters have been vocal and provocative. Kabila’s supporters have posted campaign banners and released videos proffering Kabila as their candidate for the December presidential elections even though the constitution bars him from running for a third term. Kabila has completed the two five-year terms permitted by Congo’s constitution.

Some supporters of Kabila have floated a similar scenario to what unfolded in Burundi where the number of terms served by the president was called into question and used to extend the Burundian president’s stay in power.

Whether Kabila permits elections in December or tries to run for the presidency is really a secondary matter. The priority for Kabila is to retain his hold on power whether directly – his preferred choice – or indirectly. Kabila’s actions have clearly demonstrated that he wants to retain power. He has violated the December 31, 2016 Saint Sylvestre Agreement he struck with the opposition by not organising elections in 2017; jailing opposition figures; arbitrarily arresting social justice activists; preventing exiled politicians from returning to the country; clamping down on opposition media; stacking the constitutional court; and not taking any steps to reduce tensions in the political arena.

As Kabila’s legitimacy erodes among key regional players, and internationally, he has less room to manoeuvre. He is facing intense pressure from his peers in the region who are backed by major powers in the West. Both Rwanda’s Paul Kagame (also current chair of the African Union) and Angola’s João Lourenço recently met separately with French president Emmanuel Macron to discuss the scheduled December elections in the Congo. The meetings incensed the Kabila regime which felt that France and Congo’s neighbours were plotting against the regime and threatening Congo’s sovereignty.

Angolan president Lourenço has been quoted on several occasions stating that Kabila should respect his agreements, mainly referencing the December 31, 2016, Saint Sylvestre Agreement where Kabila committed to organizing elections and leaving power. Although Lourenço has not been as vocal and emphatic as Botswana’s president Mokgweetsi Masisi, they are essentially in agreement. They would like to see elections held and Kabila depart the political scene as president of the Congo.

South Africa’s president and current chairperson of the Southern African Development Community (SADC), Cyril Ramaphosa has been conspicuously silent on the question of democracy and peaceful transition in the Congo. His predecessor Jacob Zuma was a staunch supporter of Kabila in spite of Kabila’s flaunting of democratic principles that South Africans fought for in their own country. In the case of Zuma, family and state economic interests in the Congo trumped questions of democracy and human rights. Ramaphosa also has economic interests in the Congo. In fact, he has partnered with one of the biggest players in Congo’s mining landscape, fellow South African Ivan Glasenberg who heads the mining giant Glencore.

Zambia’s President Edgar Lungu has wholeheartedly supported Kabila in his repressive and anti-constitutional practices in the Congo. Lungu’s embrace of the illegal and illegitimate Kabila serves his interests at home in Zambia as he cracks down on opposition forces and seeks regional support for his authoritarian practices.

The internal, regional and international pressure faced by the Kabila regime was compounded during the first week of June as a result of the shock announcement that Kabila’s longtime foe Jean Pierre Bemba would likely be released from the International Criminal Court (ICC). Jean Pierre Bemba has spent 10 years in jail at the ICC for crimes he was convicted of being party to in the Central African Republic in 2002-2003. The conviction was overturned this past week and he was released provisionally while he awaits a verdict on a related case of witness tampering. Bemba headed the Uganda-backed militia group, the Congolese Liberation Movement (MLC), during the 1998-2002 Congo war. He later served as vice-president in the transition government from 2003 to 2006, ran for president in 2006 where he lost in a run-off to Joseph Kabila and was subsequently elected as Senator in 2007 – a post he holds to this day.

Should Bemba choose to re-engage in Congolese politics, he will be a credible threat to the Kabila regime, especially considering the distressed state of Congo’s opposition. The opposition has been weakened by the death of long-time opposition figure Etienne Tshisekedi in 2017, the buying off opportunistic opposition members by the Kabila regime, jailing of key opposition figures and the exile of Moise Katumbi, a former Kabila ally with deep pockets who joined the opposition in 2016 when it became clear that Kabila was not going to clear a path for him to run for president. Bemba is rightfully seen as a force with which to reckon should he jump back into the fray as is fully expected by his party and supporters.

It is not clear in which direction Joseph Kabila and his regime will move in order to hold on to power. The regime recently received an infusion of $150 million in cash as a result of settled dispute with Glencore regarding mining concessions in the old Katanga province. In addition, Glencore has agreed to restart royalty payments to the US-sanctioned Israeli billionaire Dan Gertler, a close confidant of Kabila and his main access to capital. Whether Kabila attempts to run for a third term or decides to choose a successor, he will need as much cash as he can muster in order to buy off friends or foes alike.

In addition, large sums of cash will be needed for Kabila’s majority coalition to appropriate both the legislative and presidential elections. They have maintained themselves in power through fear, force and money and will need all three to manoeuvre the coming six months in order to hold on to power. The Glencore-Gertler-Kabila alliance provides a glimpse into how global finance capital is used to reinforce local African elites who in turn repress the oppressed majority and provide unfettered access to the continent’s riches.

One key segment of the Congolese population that has the potential to upend Kabila’s hold on power is the Congolese youth. Due to the threat that the youth pose to the regime, they have borne the brunt of the raw force of Kabila’s security forces. The youth are victims of widespread arbitrary arrests, torture, disappearances and killings. Recently, they lost a few of their key leaders: Thérèse Dechade Kapangala, a young woman leader who died of her gunshot wounds during a January 21 protest march; Rossy Mukendi of Collectif 2016 who was shot and killed by Kabila’s security forces during a demonstration on February 25; and Luc Nkulula of LUCHA who died in a suspicious fire in his home during the night of June 9-10. Congolese human rights groups suspect foul play on the part of the regime for the death of Nkulula and have called for an independent investigation into his death. Congolese youth have demonstrated tremendous courage in challenging the Kabila regime. Unlike the Congolese opposition, the youth have stood with and defended the interests of the oppressed class of Congolese. They systematically engage the people through political education and self-sufficiency initiatives in an effort to both improve the material conditions of the oppressed class and raise their consciousness about the local and global forces at play that have impoverished them.

The youth are determined to overturn and radically transform the system where finance capital rent local elites to perpetuate the pilfering of the Congo and the repression of the people. The forces arrayed against them are vast and global in nature and include some of the most powerful corporations and countries in the world. It is for this reason that a global people’s solidarity is urgently needed not only to support the Congolese youth in their dignified struggle for control of the affairs of the Congo but also to rescue the heart of the African continent from the ravages of the global elites, and their local agents of neocolonialism.

Kambale Musavuli is the spokesperson for the Friends of the Congo, a group that raises global consciousness about the situation in the Congo and provides support to local institutions in the Congo.