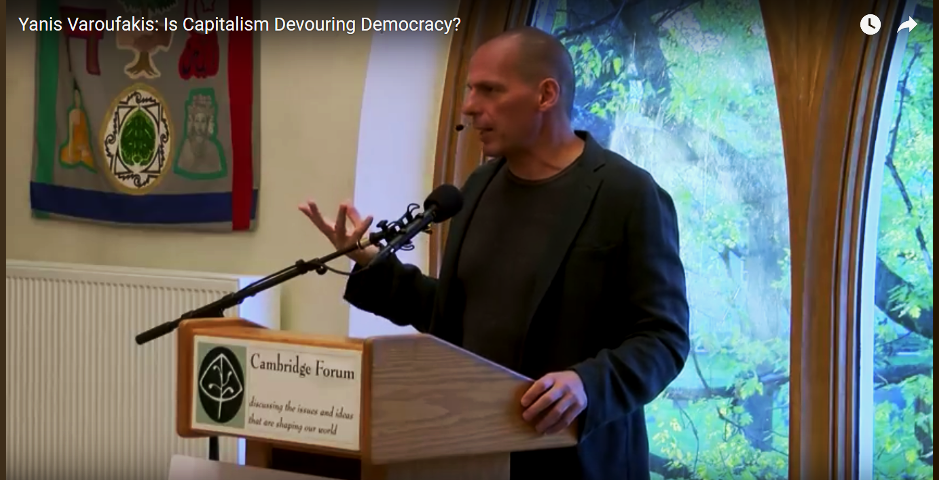 A lecture by Yanis Varoufakis, in Cambridge Massachusetts, May 2018

Yanis Varoufakis was the Greek Minister of Finance with the Syriza party government, who resigned after 6 months.   The Syriza Party proclaimed itself ready to make radical changes necessary to restore Greek sovereignty and economic stability.  In 2015, when the Syriza government held a referendum on leaving the EU, and then immediately betrayed the wishes of the people, Varoufakis resigned.

Most recently, Varoufakis has started a new political party in Greece and written a book “Talking to my Daughter About Economy”.     Having taken the initiative to describe political and economic realities in human terms, he has been making the rounds of talk news shows from Democracy Now! to the Young Turks, promoting his latest book .    This lecture seemed to me to give a particularly coherent presentation of his analysis and world view.   You can watch the interviews if you want to hear the answers to questions emerging from the discrepancies between his world view and that of the ordinary North American.

This talk by Yanis Varoufakis reframes our understanding of the relationship between political and economic activities.   His unique perspective begins by quoting a rather shocking statement made to him by a German minister.

Elections cannot be allowed to interfere with economic policy.

But in fact, this is obviously true in the EU, and has been true in the US since Nixon took us off the Gold Standard and pegged the global monetary system to the almighty Dollar.   According to Varoufakis, this is the central reality of our dying democracy here and in the European Union.   All real power is in the economic sphere while democratic participation has become a superfluous ornament to appease the people.   The real business of running the country is managed by and for the elite economic power structure.  Varoufakis goes on to discuss what we can (and must) do about this situation.

Yanis Varoufakis is a Greek economist, academic and politician, who served as the Greek Minister of Finance from January to July 2015, when he resigned following the  Syriza government disregard of public referendum on whether to accept increased austerity to remain in the European Union.

He describes himself on his twitter page as an

Economics professor, quietly writing obscure academic texts for years, until thrust onto the public scene by Europe’s inane handling of an inevitable crisis.