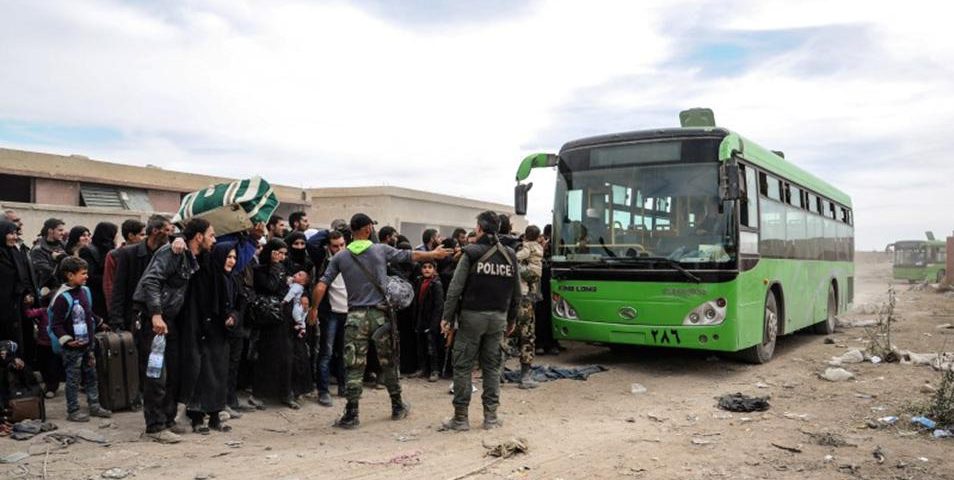 Paul has written a response to a rather insulting article by Mehdi Hassan that was published in the Intercept.  Like many of us, Paul is disappointed by a certain thoughtlessness and lack of integrity displayed by certain articles on The Intercept. especially regarding Syria.  ~Editor

Your head chopper heros are apparently not what Syrians have in mind when they think of democratic revolution.

Mehdi Hasan (MH) can hardly be blamed for the ignorance that he displays in his Intercept article, “Dear Bashar al-Assad Apologists: Your Hero Is a War Criminal Even If He Didn’t Gas Syrians.”  He has apparently never been to Syria, doesn’t often do research on Syria, and gets his information from proponents of a single point of view, representing a bunch of idealists that want to usher in their idea of a liberal democracy in Syria, without benefit of electoral niceties until their power is already ironclad.  What’s wrong with this picture?

But I’m getting ahead of myself.  Let’s start by deconstructing the absurdities and the language in the MH article.

Thankfully, MH has spared us the need to deconstruct the absurd accusation that the Syrian armed forces have used chemical weapons.  He apparently accepts that they don’t need to, that there is no benefit in using them, so why would they? OK, then who did? Cui bono? Easy answer.  The motive of the promoters of destruction in Syria is to create a pretext for the US and its partners to bomb, invade and establish a no-fly zone; i.e., to directly take on the Syrian government and its allies.  These war criminals include the neoconservative cabal in the US, the Zionist and Israeli proponents of using the US to fight Israel’s perceived enemies, and the Saudi and Qatari adventurists backing the Project for a New Salafist Paradise.  These are the same players who brought us Iraq I and II, Libya, Afghanistan forever, Somalia and Yemen.  What more could we wish for?

So let us move on to the MH complaint about barrel bombs. What is the complaint, exactly?  Are they more horrible than other types of bombs? Is it OK to use bombs manufactured in western munitions factories for delivery by jet airplanes but not ones manufactured in Syria and delivered by helicopter?  Never mind.  It’s a great opportunity for MH to use the hyped term “BARREL BOMB” in order to enrage and terrify an undiscerning readership.

But what about all the civilian casualties, and isn’t the Syrian army to blame?  Well, no, ISIS and the pseudonymous al-Qaeda affiliates are quite happy to post videos of their stonings, beheadings, crucifixions and immolations, so we know the army can’t be the only ones.  In fact, given the summary executions of non-Muslims in territories “liberated” from the government, is there any reason to think that the forces fighting the Syrian government are responsible for fewer civilian deaths? I myself met refugees who had fled up to 70 km over the mountains in the dead of winter to Latakia in March, 2013 with no more than the clothes on their back.  No one knows how many children and old people died.

Aircraft? The anti-government fighters don’t have them, do they? No, but they seem to be quite resourceful in eliminating innocent human lives nonetheless.  An example is the at least 10,000 civilians that have lost their lives in Damascus due to mortars and “hell cannons” (which also use “barrel bombs”) since the start of the hostilities.  Other examples include the withering four-year siege of the Shiite towns of Foua and Kafraya near Idlib and the unrelenting bombardment via “hell cannon” of the city of Aleppo from the enclave of East Aleppo until it was finally recovered by government forces in late 2016.

On the other hand, for those (unlike MH and the mainstream media), who consider evidence to be relevant, there is a plethora available to show that the Syrian army has been unusually respectful of civilian life. The claim is that Syria and its Russian allies have obliterated entire neighborhoods, raining bombs on the civilian population.  The facts are somewhat at odds with this description.

First, there are the civilian casualties themselves.  The UN stopped keeping casualty statistics in early 2016, but even the anti-government Syrian Observatory for Human Rights concedes that less that 1/3 of all casualties are civilians.  No other war on record has had such a low ratio. By comparison, 2/3 were civilian casualties in Vietnam, WWII and most other wars.

Second, the Syrian army liberation of Homs, Aleppo and other areas has followed a typical progression that is quite the opposite of “just kill them all”.  First, the army surrounds the area and lays siege. At this point, if the army wants to flatten the area and bring an end to the resistance there, it has the perfect means to do so.  But it does not.  Instead, it positions relief supplies at the perimeter and makes them available without prejudice to the inhabitants.  It also offers sanctuary to all who wish to leave.  Amazingly, this includes even the fighters.  Syrian fighters willing to lay down their arms are offered amnesty.  But many are not initially willing to accept amnesty, and many are not Syrian.  To these, the government offers safe passage to other parts of Syria under opposition control, even permitting the fighters to keep their small arms.

If they refuse, the siege and the fighting continue, often for more than a year, and bombing is often a part of the campaign, especially toward the end, after multiple unilateral ceasefires from the government side, to try to conclude a peaceful end, as in Aleppo.  The bombing is typically in the least inhabited areas, in order to remove cover for fighters, so that the army will incur fewer casualties when it goes in.  The strategy doesn’t always work, but the low ratio of civilian casualties is a testimony to its relative success.

Why does the Syrian government do this?  Wouldn’t it be easier to just level the entire area, civilians and all, and be rid of the fighters once and for all?

Not really.  The government is aware that families are split, with some fighting on one side and some on another. One of the reasons so many Syrians remain loyal to the government is that it is seeking to protect all Syrians on all sides, with the intention of regaining their allegiance.  The government also recognizes that many of the opposition fighters are, in effect, mercenaries, for whom fighting is a way to put food on the table when there are no other sources of income.  Such fighters are not really enemies, just desperate people.  Given an opportunity, they will easily return to the government side.

Then there are the hyped bombing casualty statistics. As I pointed out in 2015, even if we accept the statistics of the highly biased anti-government Human Rights Watch, the number of casualties per bomb is only two, including combatants.  If we apply the ratio of civilian deaths, that is less than one civilian casualty per bomb, a clear indication that the Syrian air force is being far more respectful of civilians than the US was, for example, in its bombing of Raqqah, where twice as many civilians as fighters were killed.

But MH is slamming a position that nobody holds. The number of “leftists” that consider Bashar al-Assad a hero infinitesimal. There may be many Syrians who do, but that is not who MH is referring to.  MH is misinterpreting the actions of some journalists (including “leftists”) to correct distortions and false information as defense of Assad.  Perhaps the distinction is too subtle for him, but an aversion to disinformation and lynch mob mentality is not the same as being pro-Assad.  It’s not very helpful to say, on the one hand, that you oppose intervention in Syria, and then take all your (false) information from pro-intervention sources.  In that case the interventionists will applaud your non-intervention stance.

Those of us whom MH accuses of being pro-Assad are nothing of the sort.  We believe that Syrian sovereignty and territory should be fully respected (as MH also claims to believe), but we think it is important to counter the fake news and propaganda that are being used to justify the invasion of Syria.  MH is in love with fake news.  He prefers not to mention the killing of police in the uprisings that he describes as “peaceful demonstrations”. He prefers to cherry-pick the opinions of Syrian refugees in Germany rather than the views of the vast majority of refugees (displaced persons) who evacuated to government areas without leaving Syria.  He produces the Human Rights Watch report on 50,000 morgue photos but not the deconstruction by investigator Rick Sterling. And he repeats the al-Qaeda claim and false film footage that Madaya was starving and in need when it was, in fact, sitting on a mountain of aid supplies being denied by the fighters themselves to the population.

If MH can’t see the difference between being pro-Assad and not falling for interventionist propaganda, that’s his problem.  What’s astonishing is the number of “leftists” that rail against interventionism but base their views on the drivel purveyed by the interventionists themselves in the mainstream media, and that originates from propaganda mills like the White Helmets, the Aleppo/Ghouta Media Center and other lavishly funded set designers for warmongers. If MH is not an interventionist, he’s nevertheless making their case for them.