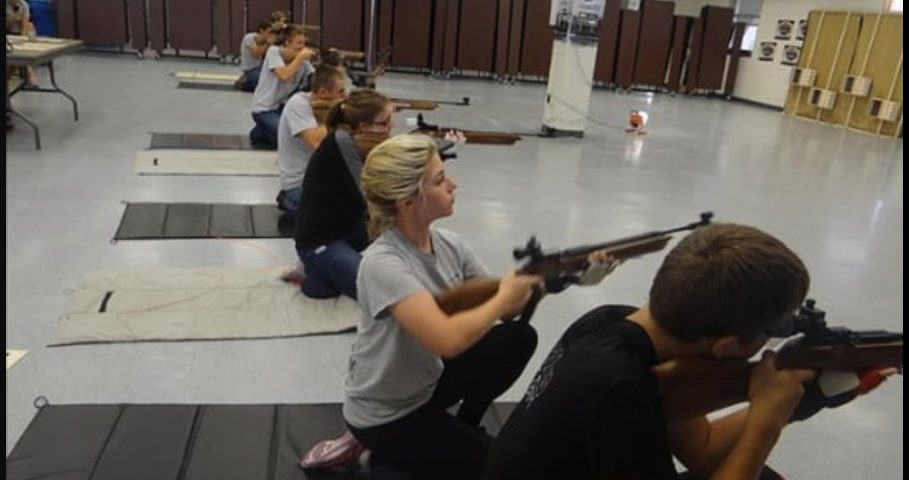 The Daisy Avanti 887 CO2 air rifle is classified as an Army weapon and is used by Army JROTC Marksmanship programs in high schools across the country. It shoots a .177 caliber flat-nose (wadcutter) air gun pellet at speeds up to 500 feet per second. A .177 caliber pellet has a diameter of .177 inches, just like a “22 rifle” shoots a bullet with a diameter of .22 inches.A .22 pistol, the kind that was used in the attempted assassination of President Reagan, fires at about 900 feet per second. They are both lethal weapons.

Twelve states, including Florida impose age restrictions on the possession, use, or transfer of air guns like the Daisy Avanti 887.  Most of these states and a few others specifically prohibit carrying air guns into schools. Incredibly, almost half of the states have no laws regulating air guns.

Many schools allow shooting to occur during school hours in classrooms and gyms that are contaminated by lead fragments that become airborne and are deposited on the floor at the muzzle-end and at the target backstop. Loose enforcement of regulations creates a health hazard for students and custodial staff. Kids are walking through lead-contaminated areas and routinely tracking poisonous lead particulates throughout their schools.

Many school officials say shooting air guns in classrooms is safe and point to the Civilian Marksmanship Program’s “Guide to Lead Management for Air Gun Shooting,” a publication that relies on outdated and faulty science. Others have banned the use of lead ammunition by children on school property.

There are still many high school shooting programs affiliated with the CMP that continue to use small-bore .22 caliber rifles and continue to hold practice indoors. The .22 small bore rifles fire standard bullets and deposit substantially more lead into the air and on the floor than the lead pellets fired from air guns. Youth groups affiliated with high school JROTC programs are often forced to use commercial firing ranges where .22 caliber rifles and enormous lead-spewing guns are regularly fired. The nation has an estimated 6,000 commercial indoor and outdoor gun ranges, but only 201 have been inspected in the past decade.Of those inspected, 86% violated at least one lead-related standard. In 14 states, federal and state agencies did not inspect a single commercial gun range from 2004 to 2013.

It is tough dislodging cavalier attitudes held by the military, school officials, the CMP and its close associate, the NRA, regarding the safety of lead ammunition in use in the nation’s high schools.As one high school coach in rural Pennsylvania stated, “High blood lead levels are going to exist.”