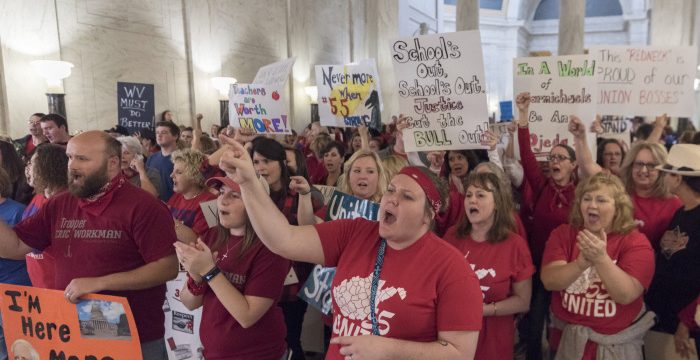 Photo: Hundreds of teachers and school personnel rally at the Capitol building on the fourth day of statewide walkouts in Charleston, W.V., on Tuesday, Feb. 27, 2018.
(Craig Hudson/Charleston Gazette-Mail via AP)

Currently labor is routinely abused, wages are under horrific downward pressure and Unions are under constant attack.  Bill Onasch describes the state wide strike of the teacher’s union in West Virginia which continues to this day with workers refusing to compromise on health care, and other positive actions by unions today.

West Virginia “Wildcats”—Technically, public sector collective bargaining is illegal in West Virginia. But practically, governors have negotiated in the past with teachers—and school service employees including bus drivers, cafeteria, clerical, and maintenance workers—for salary and benefit packages passed by the legislature. While perhaps better than nothing, the teachers have been falling behind.

School employees (20,000 teachers and 15,000 other workers) last got a raise four years ago, and West Virginia ranks 48th among state teacher salaries. If that weren’t bad enough, their health insurance benefits have been woefully underfunded, forcing them to pay more out of pocket. When the governor told them this year he could offer no more than a one percent raise, they turned to traditional trade-union tactics.

Thousands of teachers, school service employees and supporters rallied at West Virginia’s capitol in Charleston on Feb. 16 demanding that the legislature restore their drained health fund—and give them a raise. National officers of the American Federation of Teachers and National Education Association spoke, as did representatives from the state AFL-CIO, United Mine Workers, and the union representing state troopers.

Following the rally, it was announced that if no agreement could be reached, a strike would shut down every public school in West Virginia the following Thursday. That “illegal” strike lasted four school days—plus one “cooling off day”—before a tentative deal was made with the governor.

The agreement included a five percent raise in school employee salaries and creation of a “task force” to recommend improvements in health insurance for all state workers. The one-time Democrat turned Republican governor managed to sell the settlement to the GOP-controlled legislature, which voted 98 to one to approve it. The bill also included a 3% pay raise for other state workers.

Union leaders urged a “yes” vote on the proposed contract, and everyone expected a quick ratification by teachers. But that didn’t happen. Union locals in 50 of the 55 counties rejected the deal that many observers had believed was a big victory.

The ranks were generally satisfied with the wages but considered soaring health-care costs to be more important. The governor said that he would freeze health insurance premiums for at least a year, and that a task force would be appointed to look more closely at the issue. But many teachers said that the offer was still too limited. They want action, not another study. As we go to press, the “wildcat” strike continues.

Labor Board Reverses Itself—A previous Labor Briefing reported a December decision by the new Republican majority on the National Labor Relations Board to reverse the Browning Ferris ruling made late during the Obama administration. That ruling, establishing joint responsibility of corporations with their contractors and franchises in collective bargaining, had the potential to become a game-changer for efforts of fast food workers, port drivers, and others who had fallen through some cracks in red-letter labor law.

But this reprieve for the likes of McDonald’s and the Port of Los Angeles didn’t last long. It was discovered a new Trump appointee had a business stake in the outcome of that action and should have recused himself. Without his vote, the Board was tied and Browning Ferris was reinstated.

Sanctuary Through Solidarity—The New York Daily News reported: “Worried about federal immigration policies, a New York labor organization is taking steps to protect its own. Across Long Island and throughout the city, some 120,000 Teamsters are getting prepped to become a ‘sanctuary union.’ In 27 shops, business agents, supervisors and front-line workers are getting schooled on their rights under U.S. law — and when and how to challenge federal immigration agents who show up to search their work sites. The training is complex and technical—hinging on specific types of warrants and the definition of a raid. But in fundamental labor terms, it follows one simple rule: Union solidarity first, immigration status second.”

They Move Chicago—After two years of contentious austerity negotiations, and mobilization of public support by the unions, 9000 Chicago Transit Authority ATU train and bus workers have a new contract through arbitration that will expire next year. It includes $45 million in both retroactive and forward wage increases and maintains the same level of employee health-care contributions. The CTA has said it will not raise fares. The Chicago Tribune quotes the ATU Local 241 bus division president as saying it was “probably the best agreement we’ve had in decades.”

Go Fund the Boss?—The Associated Press reported: “Southwest Airlines appears to be backing down from a demand to get credit for money donated to a fired employee’s GoFundMe account. The change of heart comes after a union accused Southwest of abusing the generosity of the man’s co-workers.

“Southwest fired Dallas mechanic Ken Hackett a year ago and accused him of helping organize a boycott of overtime assignments. In December, an arbitrator ordered the airline to reinstate Hackett with back pay minus any income he earned from other sources.

“Southwest originally considered the $25,000 raised on GoFundMe to be outside income, reducing the amount it owed Hackett. Southwest earned $3.5 billion last year.”

Putting Movement Back In the Labor Movement—That’s one of the slogans of Labor Notes, a useful monthly publication that covers labor struggles, and movements for union democracy that are given scant attention by the boss media. Every two years, they sponsor well-attended educational conferences. This year it’s expected that 2000 labor activists from across North America—and dozens from other continents—will be at the Labor Notes Conference in Chicago, April 6-8. Details can be found online at: labornotes.org/2018.

Note:   The West Virginia Teacher’s Union strike ended today (Tuesday afternoon) after  a 5% raise for all state employees was passed in the WV legislature and signed by the governor.   Health Insurance provisions were also protected from further losses.  They Won!