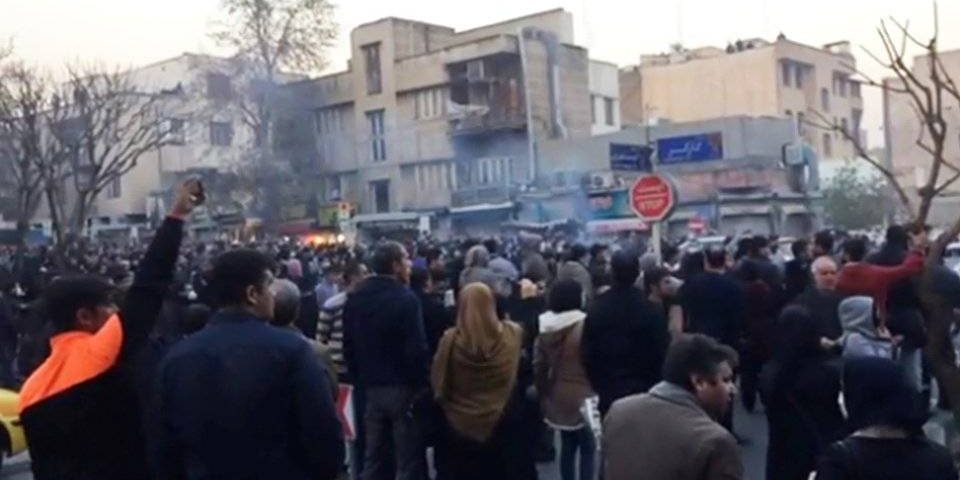 Mass demonstration in Iran’s provincial cities made international news as 2017 ended and elicited tweets from the U.S. president warning Iran’s government not to suppress the protesters. To help orient the progressive and anti-war movement in the United States, Workers World managing editor John Catalinotto spoke with Sara Flounders, co-coordinator of the International Action Center and organizer of the Stop the War on Iran Campaign.

WW: What’s most important for the U.S. movement to know about the events starting in late December in Iran?

Sara Flounders: Before we go through the facts as best we know them, we need to first make some overall political points clear. First, from here in the center of world imperialism it is important to hold firmly to a basic understanding of the relation between the United States, which is the center of world imperialism, and Iran, a developing country that Washington has targeted since its revolution in February 1979.

That revolution against the hated Shah, while ultimately led by clerics, resulted in Iran gaining control of its resources, thus enabling great gains in modernizing the infrastructure, building mass housing, achieving full literacy through free education and providing free medical care for the people.

Anti-war and progressive activists need to start with the basics of what they already know about past U.S. campaigns of subversion in Iran as well as Washington’s attempts at regime change in other countries. Otherwise they can get lost in the morass of corporate and social media disinformation.

Washington has also targeted Iran because of its long defense of the Palestinian struggle and aid to Lebanon after the massive Israeli bombardment and invasion in 2006. This increased after Iran’s aid to the sovereign Syrian government. The U.S. attempted regime change in Syria starting in 2011 through bombings, sabotage and arming tens of thousands of right-wing and extremist marauders. More recently, Iran has shown solidarity with Yemen, which is facing a massive, protracted war from the Saudi monarchy, supported by the Pentagon.

So whatever the details of the current developments, our position here in the center of imperialism must be clear and forceful: U.S. hands off Iran! No intervention from the U.S. can help the Iranian people.

WW: And the current events?

SF: As far as we can tell, the protests started in Iran’s second-largest city, Mashad, on Dec. 28 and were over rising food prices and unemployment. These protests, centered on economic grievances, quickly spread to other cities in the provinces but not to the capital, Tehran.

We should point out that a major, if not the major, cause of the economic problems is U.S. and European Union sanctions, which were imposed many years ago in order to create and increase internal dissension. U.N. sanctions, however, were lifted two years ago, after Iran suspended its nuclear program.

In recent years the low global price of oil, in addition to continued U.S. and EU sanctions, have exacerbated unemployment and decreased the government’s ability to provide subsidies for food, fuel, housing and education.

The government and other political forces inside Iran seemed to agree at the beginning that the demonstrations were spontaneous, spread rapidly and focused on justified economic demands and cutbacks of government subsidies that impacted the poorest workers. This was also the reaction of President Rouhani, who said the protesters had the right to demonstrate but not to carry out violent actions.

The protests then quickly attracted forces that appeared to be totally hostile to the Iranian Revolution, although the extent of this was likely exaggerated in the imperialist media. People in the Iranian government and state apparatus charged there was outside intervention and planned internal subversion. At rallies, people on both sides were shot.

This has also happened in Venezuela, Libya and Syria, in demonstrations where unidentified gunmen fire into the crowds and also shoot at police to instigate repression and chaos, which is then blamed on the government.

Meanwhile, there have also been pro-government mobilizations in some cities, in Tehran and in the provinces.

WW: What has been the U.S. ruling-class reaction?

SF: The U.S. president has been openly super-hostile to Iran and wants to break up the nuclear agreement that removed U.N. sanctions from Iran. Trump intervened in December with tweets attacking the Iranian government and encouraging the demonstrators. U.S. representative to the United Nations Nikki Haley then raised in the U.N. Security Council the question of alleged Iranian government repression. Washington was clearly trying to use the events to tear up the nuclear treaty.

Whether in Venezuela, Libya, Syria, Yugoslavia, Zimbabwe or Iran, imperialism attempts to provoke internal dislocation and highjack whatever opposition arises in order to turn it into a tool against the government. Regardless of the class basis of the original protests, the orientation of the internal right-wing forces, the U.S. State Department and numerous imperialist secret agencies is to make every effort to immediately impact their political character and weaken the state, which they see as an enemy of imperialism.

At the U.N., Washington had little support for this, even from the other imperialist countries, which so far have supported the nuclear treaty.

Corporate media coverage of the Iranian protests has been extensive and sympathetic to the protesters. It has exaggerated the extent of the protests while criticizing Tehran for repression. How unlike their meager coverage, for example, of Black Lives Matter protests in the U.S., pro-Palestinian demonstrations anywhere or the ongoing protests of the fraudulent election in Honduras.

The U.S. government and corporate media hypocritically express full support for protests over rising food prices and economic hardship even as Washington imposes sanctions that dislocate economic development and create wrenching shortages, which can be as brutally effective and destructive as bombs.

It is reasonable to suspect a U.S. role in any turmoil in Iran, as the U.S. engineered the 1953 coup that replaced an elected government with rule by the hated shah. In 2009 a U.S. think tank, the Brookings Institute, published a manual on how to overthrow the Iranian government and take control of the country. Chapter headings included: “The Velvet Revolution: Supporting a Popular Uprising” and “Inspiring an Insurgency: Supporting Iranian Minority and Opposition Groups.” (tinyurl.com/y8nkrnmc)

But the existence of these U.S. plans doesn’t explain the origin of every struggle.

WW: What is the nature of the internal struggle in Iran?

SF: Iran is a capitalist country, but its ruling bodies are rooted in a revolutionary upheaval that totally threw out U.S. imperialist domination. It nationalized the oil and gas resources, Iran’s greatest source of wealth. It now has a strong state sector.

In the internal class struggle in Iran, as in every capitalist country, the capitalist class seeks to use every leverage and form of corruption to increase its wealth and position.

The government of President Rouhani was committed to finalizing negotiations with the U.S. and European powers to end the strangulating economic sanctions. In order to normalize economic relations, the Iranian government also accepted many International Monetary Fund and World Bank demands to drastically reduce subsidies and privatize some industries. This policy was favored by the capitalists and middle class.

The IMF and World Bank had earlier made these same demands on Syria and Libya as the price of normalizing economic and especially banking transactions. Before 2011, the IMF had demanded a cut in subsidies to the working class and poor as the price for normalizing relations with these two countries.

Currently the Iranian government provides $100 billion per year in subsidies for fuel, bread, sugar, rice, cooking oil and medicine. About 90 percent of the population receives direct cash subsidies each month directly into their bank accounts, at a cost of $30 billion. These subsidies soften the impact of high youth unemployment and closed industries.

The recent protests were triggered when cuts in subsidies by the Rouhani government led to a rapid 40 percent increase in the price of eggs and poultry. For the poor to battle these cuts is justified. These were demonstrations demanding social justice. The problem is U.S. intervention and the attempt to wield the protests against the government.

WW: And how would you summarize?

SF:  While as you can see there are other points that help explain the current crisis and the demonstrations, these need to be balanced with defense of Iran’s sovereignty and our complete opposition to U.S. imperialism.

The anti-imperialist view from here in the center of U.S. imperialism is: Hands off Iran! End the sanctions! Stop the threats!

Don’t believe the corporate media hype. The U.S. sanctions, war threats and sabotage are the greatest source of the problems facing Iran, which is still a developing country.