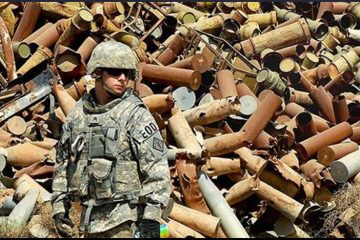 Image: Soldier walks by heap of expended ammunition, from BrightHub.com: What is Solid Waste by Ciela S Cantoria Editor’s note: Yes.  This article is 2 years old, and was published under what is likely a pseudonym on a libertarian blog.  But, the facts are lined up so clearly and the documentation is so reliable that once I saw it, I[…]