By Wayne Delucca, originally printed on Socialist Action On Nov. 14, the Zimbabwe Defense Forces took control of the capital city, Harare. A week later, Robert Mugabe—the only leader Zimbabwe has had since independence in 1980—resigned. On the 24th, Emmerson Mnangagwa, Mugabe’s former right-hand man and until Nov. 6 the vice president, became the new president. The coup was brewing[…]

END_OF_DOCUMENT_TOKEN_TO_BE_REPLACED 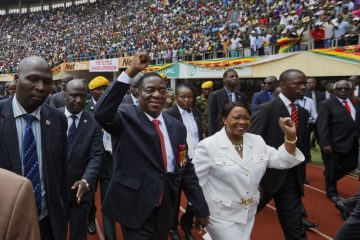 Abayomi Azikiwe, Editor of Pan African News Wire, discusses the context of Emmerson Mnangagwa’s coming to power as President of Zimbabwe and the direction his policies might take. Published on TVC News, Nigeria, Nov 25, 2017