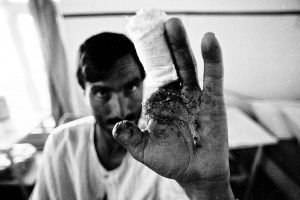 A civilian holds up his recently maimed hand as testimony to the violence and destruction of daisy-cutters and fragmentation bombs that have often been indiscriminately dumped on Afghan villages and also part of ‘precision’ or ‘surgical’ strikes targeting the so-called ‘Taliban’. To the United States military, every Afghan in Afghanistan is presumed to be ‘Taliban’: guilty until proven innocent: and therefore everyone is considered a fair target. There is almost zero accountability: this war and the others are prosecuted with impunity.