by Azza Rojbi, published in the Fire This Time Newspaper, December, 2020

“I was still awake. I was sitting in a chair because I was afraid of the planes flying overhead and making a very loud noise. Then they dropped a bomb near us and afterwards they hit our neighbourhood with three bombs. After that, I lost consciousness.” 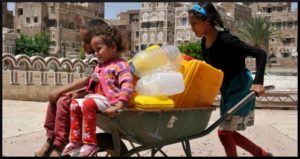 These are the words of Yemeni child Ahmad Mansour, ten years old, after he survived the Saudi-led airstrike in his neighbourhood in the Midi District, Hajjah Governorate in north-western Yemen. Ahmed was injured, and his mother and siblings died in the airstrike. A total of 15 people were killed that day (nine children and four women).

The airstrike against Ahmed’s neighbourhood is one of the horrific incidents documented by the Yemeni organization Mwatana for Human Rights in a report titled “DAY OF JUDGMENT”: The US’s Role and Europe in Civilian Death, Destruction, and Trauma in Yemen.” According to the report, a “US-made BLU-63 cluster bomb Submunition” was used by the Saudi-led coalition in this bombing.

Ahmed and his family’s tragedy is similar to that of many other Yemeni families as the Saudi-led coalition war and destruction on Yemen continues into its sixth year. In its 2020 Global Humanitarian Overview, the United Nations Office for the Coordination of Humanitarian Affairs (OCHA) said that the war on Yemen “had already caused an estimated 233,000 deaths, including 131,000 from indirect causes such as lack of food, health services, and infrastructure”. To put this devastating number of deaths in perspective, this would be the equivalent of over 2.5 million people killed by war in the United States. 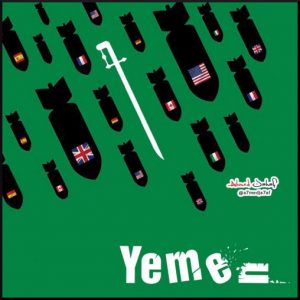 The humanitarian crisis in Yemen is the worst in the world. Those who survive the war live in dire situations struggling to provide for their own basic human needs and those of their families. According to the United Nations, nearly 80 percent of the Yemeni population — over 24 million people — rely on humanitarian assistance to live. Children suffer the most, with 100,000 children under five years old at risk of dying from acute malnutrition.

The U.S.-backed Saudi-led coalition has bombed and destroyed vital civilian infrastructure in Yemen. Over half of Yemen’s healthcare facilities have been damaged and closed due to the war. To add to the brutal bombing, the Saudi-led coalition maintains a sea, land, and air blockade on Yemen. The cruel blockade hinders Yemen’s access to food, fuel, medicine, and medical equipment.

The Saudi-led war on Yemen continues to intensify the humanitarian crisis in the country. 3.6 million people in Yemen have been internally displaced and live in makeshift shelters and refugee camps inside Yemen. According to the UN, Yemen is home to almost 300,000 refugees from countries in the horn of Africa, mainly from Somalia. Refugees across Yemen live in harsh conditions under the threat of war and hunger, making them very vulnerable to diseases, especially in the context of the Covid-19 pandemic. 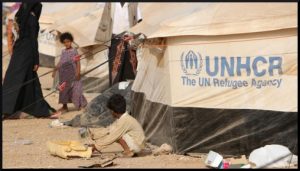 Hundreds of thousands of Yemenis chose to make the perilous journey to leave Yemen to seek safety and asylum in other countries such as Egypt, Djibouti, Somalia, Malaysia, Jordan, and Sudan. These families that were forced out of their beloved homeland by the Saudi-led war find themselves stranded in foreign countries with very little support. The United Nations High Commissioner for Refugees (UNHCR) response to Yemeni refugees’ suffering has been completely inadequate and insufficient.

The same “international community” has been profiting since the start of the war on Yemen from selling weapons and military equipment to Saudi Arabia, the United Arab Emirates, and their allied coalition. The U.S. and its western imperialist allies are directly responsible for the war and destruction in Yemen. Yet, they purposely turn a blind eye to the suffering of millions of displaced Yemenis internally and internationally.

Imperialists Complicity and Hypocrisy of the War

Since the start of the war, the United States has only accepted over 50 refugees from Yemen! In contrast, the U.S. has provided political, logistical, and military support to Saudi Arabia to carry out the war under the guise of restoring legitimacy and stability to the region. Over five years of Saudi-led war on Yemen only achieved death and destruction with no peace or stability in sight.

The U.K. government also continues to profit from weapons sales and to provide military training to Saudi Arabia. An article published on September 23, 2020, in Declassified UK, an investigative journalism website, exposed that Saudi combat aircraft pilots continue to receive training in the U.K. by the British Royal Air Force.

Just like the U.S. and the U.K., Canada also has blood on its hands as it also continues to profit from selling arms to Saudi Arabia and other countries in the military coalition. According to data from the “Canadian International Merchandise Trade Database,” Canada has exported over $600 million worth of “Tanks and other armoured fighting vehicles, motorized, and parts” to Saudi Arabia just in the period between July and October 2020.

In contrast, Canada contributed $220 million in humanitarian assistance for Yemen since the war in 2015. Canada’s amount of money made selling weapons to Saudi Arabia in the last four months is three times higher than the total amount donated by the government in aid for Yemen in over five years! Such hypocrisy! 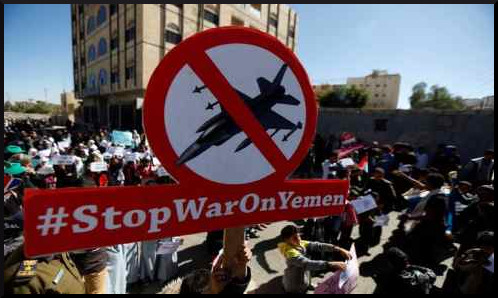 In addition to profiting from the war, Canada also joins other Western countries in disregarding the Yemeni refugee situation. While hundreds of thousands of Yemenis are still stranded in transit countries, Canada has only accepted 124 refugees from Yemen between January to June​ 2020. What a shame!

No to the War on Yemen

The hypocrisy of countries like the U.K., the U.S., and Canada is so revolting. As long as they continue their political and military support for the Saudi-led war on Yemen, there will be no solution to the country’s humanitarian or political situation. We must hold our respective governments accountable and demand an immediate end to the war and that they open the borders to Yemeni refugees and grant them asylum. The solution to Yemeni political problems has to come locally from diverse Yemeni voices, without any military and foreign interference. The Yemeni people deserve a future in peace and prosperity.

Let’s add our voices on January 25, 2020 for the global day of action against the war on Yemen organized by the Yemeni Alliance Committee and other anti-war and humanitarian organizations from across the world. Fire This Time Movement for Social Justice endorses and supports this critical international initiative led by the Yemeni community, and we will actively build it. For more information on the campaign, you can read the international joint statement against Yemen’s war on page 9 of this issue. Let’s unite our voices to demand an end to Yemen’s brutal and cruel war and blockade. Saudi Arabia and U.A.E Stop Bombing Yemen! U.S., U.K., and all imperialists Hands Off Yemen!