A full trade blockade was announced by Democratic U.S. President John F. Kennedy on February 3, and formally established on February 7, 1962. The U.S. government claims these sanctions were and are meant to punish the revolutionary government of Cuba, not the Cuban people. However, over 57 years under this unjust and cruel U.S. policy has demonstrated that these sanctions are hurting all sectors of Cuban society: cutting access to medicines, school supplies, construction materials, and the list goes on. There is also strong evidence that the blockade hurts people living in the United States: imposing travel restrictions, international legal/financial penalties on U.S. companies, the sale of Cuban medicines to the United States, etc.

In 2014 – when Cuba and the United States formally re-established diplomatic ties under then-Cuban President, Raul Castro and then-U.S. president, Barack Obama – many believed it was only a matter of time until the blockade would end. However, Obama did not have the political will or political power needed to end this unjust U.S. policy.

Now, in 2019, under U.S. President Trump, the U.S. government is strengthening its blockade on Cuba by invoking “Title III” of the Helms-Burton Law of 1996. President Clinton and all preceding U.S. presidents (including Trump until this month), have signed orders not to implement “Title III”, which is one of the more punishing measures within a severe law aimed at crippling the Cuban economy and Cuba’s independence.

Of course, in over 57 years the Cuban people and government have chosen to defend their dignity and sovereignty in face of these unjust and cruel sanctions.

Ricardo Alarcón de Quesada is a well-known Cuban politician. He was Cuba’s Ambassador to the United Nations, as well as, the President of the National Assembly of People’s Power of Cuba for over 20 years. Alarcón has a background in writing and journalism, having graduated with a PhD in Philosophy and Literature.

In April 2019, as the U.S. government reinforced its cruel and inhuman blockade on Cuba, Alarcón wrote a thoughtful and educational piece for CubaDebate titled, “Soñando en Miami”. It has been translated and republished widely, including here in Fire This Time. -Tamara Hansen

After three months of threats and threats on carried out on two stages – the State Department in Washington DC and a theater in Miami – the US Administration finally announced what it intends to do to intensify its economic war against Cuba. 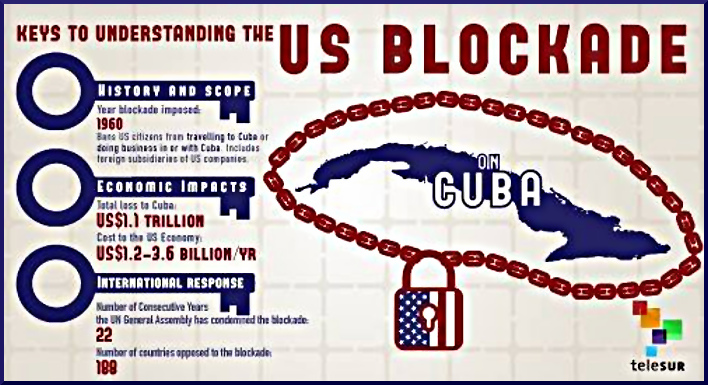 On April 17th, at a mid-morning brief ceremony lasting just a few minutes in the Washington DC, Secretary of State Mike Pompeo made it known that they will fully implement Title III of the Helms-Burton Act. He did not offer any further explanations, although he said that as of May 2nd, “Cuban-Americans” will be able to file claims before the US courts against those who in any way use the properties that they claim were theirs or their families.

There were no questions and no text was available to answer questions that such a decision may have provoked among those who remember that for twenty-three years – Clinton, W. Bush, Obama and Trump himself – had adopted a position contrary to what is now being announced.

Official statements were immediately made by Spain, Canada, Mexico and the European Union who, in addition to protesting, warned that they will take the necessary measures to neutralize any attempt to harm their legitimate interests and recalled that they are capable of doing so, bearing in mind that there is no shortage of US investments in their countries.

The most notorious spectacle was reserved for Miami and John Bolton, National Security Advisor, who played the main role. His audience was the members of what remains of those who were part of the 2506 Brigade, that is, the remains of the invading group that 58 years ago was defeated by the Cuban people in 66 hours.

Bolton repeated what Pompeo said earlier regarding the lawsuits and also announced the re-imposition of severe restrictions on the travel of Cuban Americans to their country of origin and on the remittances they send to their families on the island, measures that were previously applied by W. Bush and generated the rejection of the vast majority of that community which has since reflected itself in the Miami-Dade County elections.

The Miami show was as pathetic as it was grotesque. The old and tired veterans failed when they were young and organized by the CIA, and with the support of the U.S. armed forces they went to Cuba to recover “their” estates, “their” factories and “their” mansions. Now Bolton promises them that the chimera will finally become a reality.

The show was summed up by Nicolás Gutierrez Castaño:

“Even in our most feverish dreams we could not conceive that a U.S. government would do it. No one ever did. Forget Reagan. Forget Bush.”

Excited, the skillful managing lawyer of Helms-Burton believes the time has come to “recover” the large properties stolen from his great-grandfather.

An unabashed dreamer, Bolton, for his part, invited to make a toast to the Monroe Doctrine that, according to him, is alive and healthy.

Intoxicated , “celebrating” his fulminant defeat, the guests at the strange banquet applauded him with delirium.

It is time to wake them up. A CubaNews translation. Edited by Walter Lippmann, further slightly edited by Arnold August.
www.walterlippmann.com

Originally in Spanish from: www.cubadebate.cu