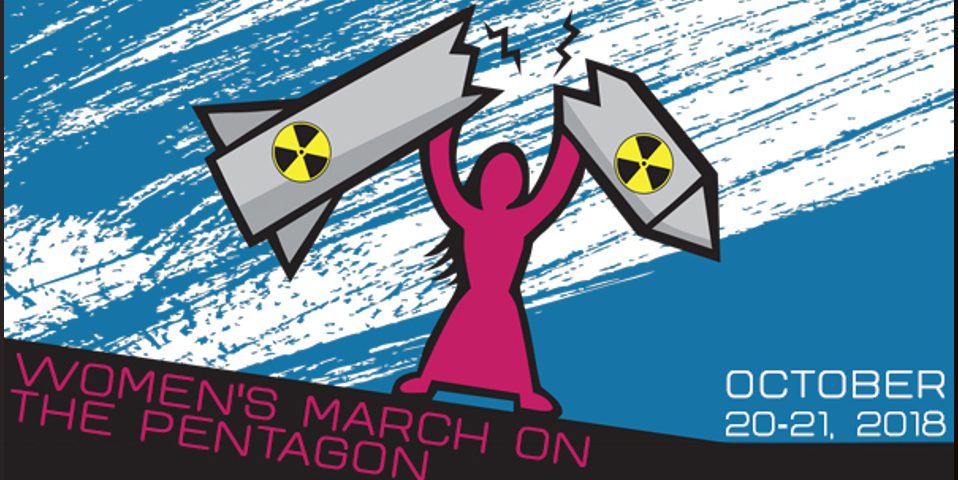 Hundreds of people participate in Women’s March on Pentagon rally to voice their protest against aggressive US foreign policy.

The march dedicated to the 51st anniversary of the big rally of 1967, when dozens of thousands of people gathered near Pentagon to protest against the war in Vietnam.

The new rally was organized “In response to the ongoing US military aggression across the globe and the continuing bi-partisan increases in Pentagon funding,” its facilitators said.

Women’s march on the pentagon pic.twitter.com/lmYZtyD3fE

“Our demands are simple: The complete end to the wars abroad; closure of foreign bases; dramatically slash the Pentagon budget to fund healthy social programs here at home: the only good empire is a gone empire,” they said in a statement.

They also called on their supporters to “march for peace and against the war machine.”

The march is endorsed by a dozen organizations, including Green Party US, The United National Antiwar Coalition, The Black Alliance for Peace.

The Staging for the #CindySheehan led Women’s March for Peace March on the Pentagon ⁦@cynthiamckinney⁩ pic.twitter.com/87gCsU24MT

Sputnik reporter Alex Rubinstein was on the ground for the 2018 Women’s March on the Pentagon and was able to speak to protest organizer Cindy Sheehan and director Bonnie Caracciolo. Sheehan’s son was killed in Iraq in 2004.

Pardon the continuity problems in the interview. I’ll be tweeting some photos and hoping to get some good interviews while I live stream for @SputnikInt on Facebook https://t.co/bLP88dpki9

Sputnik: Is the march primarily addressing US wars overseas as a women’s issue?

Sheehan: “Women around the world are being occupied by US imperialist forces or countries that the US are supporting, [like] Israel and its genocide against Palestinians, in Gaza, particularly.”

“We know that the United States is supporting Saudi Arabia and its absolute horrible, incomprehensible, destruction of Yemen where tens of thousands of of people are dying and millions are starving at this moment.”

On gender acceptance by the US military:

Sheehan: “We don’t like Trump, but we don’t like Trump for the same reason that we didn’t like Obama and Bush. They are representative of the most evil, violent, racist and sexist [people] in [the US] empire, if not in history.”

“When Trump was first elected, my first thought was, ‘well, maybe the movement will be revitalized,’ even though I feel that the movement was very hypocritical because they were against the war in Iraq and Afghanistan while Bush was president but not against those wars when Obama was president, or his destruction of Libya or further incursions into Africa, Syria, Somalia and not ending the wars in Iraq and Afghanistan.”

On Washington DC and the political will for peace:

Sheehan: “The Democrats are just as bad as the Republicans.”

“We have to take these forces who have separated from the Democrat and Republican parties and funnel that energy more positively.”

Sputnik: How does the peace movement coincide with your experience as an American with a family?

Caracciolo: “I don’t want my kids to go to the military. We need to keep our kids out of there. We all need to take a big hard look at where our money is going.”

“The suicide rate among returning veterans is absolutely over the cliff. Also, if you look at these refugee streams, they are women and children that are suffering from every angle. So, [war] is a women’s issue.”

“It always absolutely has been a women’s issue. We want our sons and other brothers and our husbands and our uncles to be with us on this, because it is everybody’s issue, ultimately.”

Ed Note: The Women’s March on the Pentagon was also covered by Telesur and Russia Today!

We’re pleased to see that Sputnik news covered the event as no US corporate media mentioned it in their reporting.  It seems that the people in power, including the media, do not want the public to know that the peace movement is growing.

The Women’s March on the Pentagon is part of what we have called an Antiwar Autumn which is a series of events that is rebuilding the peace movement at a time of never ending war and record military spending.

The next important US event is the Peace Congress which will be held in Washington, DC on November 10 at the Capitol Hill Presbyterian Church, 201 4th St., SE, Washington, DC, Fellowship Hall. The Peace Congress to end wars at home and abroad is part of a weekend of activities that replaces the Trump Military Parade which a coalition of more than 250 organizations helped to stop. After a morning plenary to set the stage this will be an all day general assembly to discuss how to build the peace movement, opportunities and challenges the movement faces, roles we can all play in building a peace movement, define short-term, medium-term and long-term goals as well as next steps we can take together.