John McCain, the right-wing U.S. Senator, and war criminal, from Arizona, has died after a struggle with brain cancer. More recently, McCain has been a thorn in the side of Donald Trump’s presidency on certain aspects of policy.

Predictably, liberals and social democrats have joined with conservatives and centrists to heap praise on McCain for his “humanity, decency, and courage.” The Democratic “socialist” congressional candidate Alexandria Ocasio-Cortez praised his “human decency,” and Bernie Sanders extolled his “decency and humanity.” This praise is misplaced.

A Navy pilot during the Vietnam War, McCain was shot down during a bombing mission and held as a prisoner of war in Hanoi for 5 and a half years. He entered politics, running for the House of Representatives in 1982, where he was a supporter of the reactionary foreign and domestic policies of the Reagan administration. 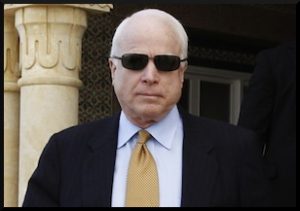 McCain’s record was thoroughly reactionary to the end. He voted for the Trump tax cut for the rich and was a consistent supporter of every U.S. imperialist war and aggression overseas—from Cuba and Nicaragua to Iran, Afghanistan, Libya, and Iraq. He famously sang “bomb, bomb, bomb, bomb, bomb Iran” during an event. He was a defender of Israel’s violent attacks on the Palestinian people and opposed any notion of a Palestinian state. He called for a U.S. attack on Syria in 2013 and was a vocal supporter of the Saudi-led slaughter in Yemen.

McCain expressed his hatred of “gooks,” a racist term for Asian people. When challenged for this slur, he showed no regret and said he would continue to call his former captors that word.

McCain supported Central American death-squad regimes in the 1980s and the murderous Contra war against the Nicaraguan Revolution, including a personal contribution to a Contra terrorist group. He was a board member of the U.S. Council for World Freedom, the U.S. branch of the World Anti-Communist League, which was linked to Iran-Contra money transfers and death-squad activity in Central and South America.

He voted against the Martin Luther King holiday. He also opposed sanctions against the South African apartheid regime. He never met a budget cut he didn’t like that attacked poor and working people. He supported privatization of Social Security, a move that would be disastrous for older workers.

McCain played a role in the sale of mining rights, on indigenous Apache land in Arizona, to copper mining interests. This was made possible by a provision added to the 2014 National Defense Authorization Act (NDAA) with McCain’s collusion.

Capitalist politicians, both right or “left,” play a game that exists to preserve the power and privilege of the few. It’s the rules of this game that allow the various players to praise McCain “despite our differences.” We hear no mention of his racism, service to big business, or warmongering. It was Trump’s violation of these rules, by mocking McCain’s war record, that helped liberals embrace McCain’s “maverick” status.

The rules set limits within which the bourgeois politician operates; ignore them and you become the object of scorn. One day, it’s likely that some rightist GOP politicians will talk about how they “respected” Bernie Sanders “despite our differences.”

Working people have no stake in the game played by both parties of bourgeois politics. Instead, the working class and oppressed need a party of their own, a party that fights daily in the interests of all of the victims of this system. In the end, what is at stake is not “differences” between factions of ruling class politicians.

What is at stake is the future of humanity and the planet. To fight for a better world, we need a new politics, not participation in the political games of our class enemies. The genteel standards of bourgeois politics don’t apply to fighters for socialism.