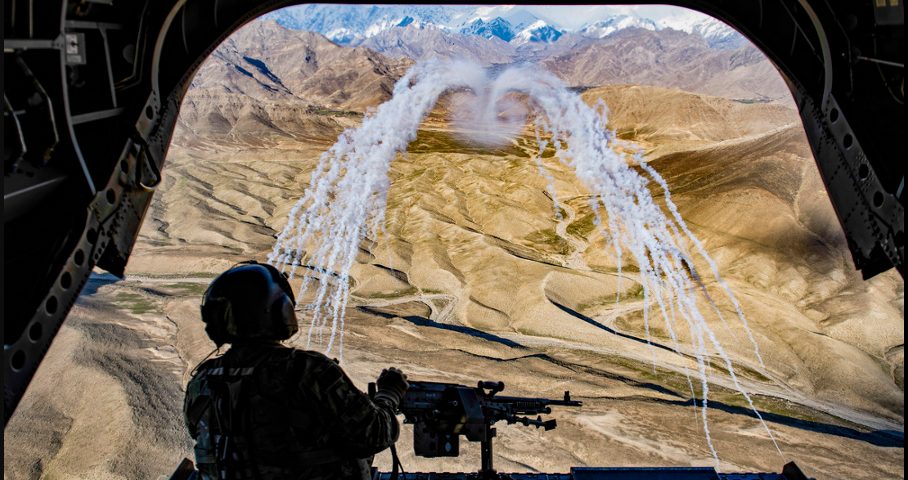 An Army crew chief aboard a CH-47F Chinook helicopter during a training flight in Afghanistan, March 14, 2018, as part of a joint Army-Air Force exercise. Gregory Brook | U.S. Air Force

It may seem paradoxical that any American interest would seek to deliberately prolong the Afghan quagmire. Costing trillions of dollars to the national debt, one would think that US planners are anxious to wind down the war and cut their immense losses. Not so, it seems.

Like the classic 1960s satire film, Dr. Strangelove, and how he came to “love the A-bomb”, there are present-day elements in the US military-security apparatus that seem to be just fine about being wedded to the mayhem in Afghanistan.

That war is officially the longest-ever war fought by US forces overseas, outlasting the Vietnam war (1964-75) by six years – and still counting.

After GW Bush launched the operation in October 2001, the war is now under the purview of its third consecutive president. What’s more, the 17-year campaign to date is unlikely to end for several more years to come, after President Donald Trump last year gave the Pentagon control over its conduct.

This week saw two developments which show that powerful elements within the US state have very different calculations concerning the Afghan war compared with most ordinary citizens.

First, there was the rejection by Washington of an offer extended by Russia to join a peace summit scheduled for next month. The purpose of the Moscow conference is to bring together participants in the war, including the US-backed Afghan government of President Ashraf Ghani, as well as the Taliban militants who have been fighting against American military occupation.

Washington and its Afghan surrogate administration in Kabul said they would not be participating because, in their view, such a dialogue would be futile.

One suspects that US reluctance is partly due to not wanting to give Moscow any additional international standing since Russia’s successful military intervention in Syria and its leading role in mediating for peace there.

It also seems incongruous that only last week the US-backed Ghani administration offered to call a ceasefire with the Taliban to mark the Muslim religious festivities of Eid al-Arafat. If President Ghani can see fit to call a truce with the militants, then what is so objectionable about sitting down with them in Moscow?

Another, more sinister, development was the disclosure this week by the Russian foreign ministry that it had tracked large-scale weapons supplies to militant groups in Afghanistan’s northern region. The foreign ministry said the weapons were dropped off by unidentified military helicopters.

What’s more, the helicopters were apparently given flight clearance by the US military forces and their Afghan national army charges. There can be only one conclusion: the Pentagon or the CIA are complicit in arming insurgents whom they are supposed to be trying to defeat. This is not the first time that such clandestine trafficking of weapons by US forces in Afghanistan has been reported by the Russian foreign ministry.

Similar skulduggery involving US military with terror groups in Syria has also been documented.

Recall too an interview given at the end of last year by former Afghan President Hamid Karzai who said categorically that US military commanders were responsible for cultivating Islamic State (IS, ISIS or Daesh) terrorist networks in his country. These groups seem to be separate in intent from the Taliban factions.

Ironically, US commanders have recently accused Russia of supplying weapons to Taliban fighters. Moscow and the Taliban have both separately denied any such link.

Such claims by Washington seem more plausibly an attempt by the Pentagon to muddy the waters of their own complicity in arming illegal militant groups in Afghanistan.

The question is: why would US forces want to aid and abet militants and prolong a war that has cost the American taxpayer trillions of dollars? Why would Washington spurn an opportunity to participate in the Moscow-convened summit scheduled for September 4, which is aimed at finding a peaceful settlement to the conflict?

In short, what US interests are there in prolonging this appalling war?

While the occupation of Afghanistan by US troops is a deadweight for the American national economy and citizen-taxpayers – adding up to $5 trillion to the country’s total debt load of $21 trillion – we have to bear in mind that for weapons manufacturers and suppliers, the war is a boon. It keeps the military-industrial complex humming with super profitable business. Companies like Lockheed Martin and Raytheon, which are among the top lobbyists to Congress, using a coldly rational logic would not want this war to stop. Ever. Their corporate interests are starkly divergent from ordinary US citizens and foot-soldiers on the ground. So what if the nation is $21 trillion in debt when mega profits are being scooped up by executives and shareholders of the weapons companies?

It is also well-documented that the CIA depends on lawlessness in Afghanistan to run its trillion-dollar opium drugs racket. As with the notorious Golden Triangle in Southeast Asia during the Vietnam war, the CIA uses global drugs trafficking as a way to fund its “black operations” in others parts of the world, finances that are kept hidden from political oversight by Congressional lawmakers.

A third incentive for American imperial planners to keep Afghanistan in turmoil is that it allows the US to mobilize and weaponize proxy armies for the purpose of harrying Russia and Iran. Afghanistan has a border with Iran to its west and it is a spearhead into Russia’s southern flank. For the US, having a base for militants with which to penetrate and destabilize either Iran or Russia is a strategic asset, not at all a strategic loss. Especially now given that Iran and Russia have succeeded in routing the US-backed jihadist bases in Syria.

Indeed, Russia has already explicitly expressed the concern that a lawless Afghanistan presents a direct security threat to its national interests.

So, yes, by any normal reckoning, Afghanistan has been a catastrophe for US citizens, as well as of course for millions of Afghanis who have lost loved ones, homes, jobs, and livelihoods only to eke a subsistence in grinding poverty.

But in a more sinister reckoning, there are powerful American interests which view the suffering and calamity of Afghanistan as a lucrative, strategic venture that must be kept going.

Afghanistan may be a seething swamp of suffering. But it’s a swamp that is at the same time spawning immense advantages for a select few overseeing US imperialist interests. That makes the tragedy of the country more poignant. Heinously, crucial incentives are not to stop the war, but to keep it going.

Finian Cunningham is a former editor and writer for major news media organizations. He has written extensively on international affairs, with articles published in several languages.
Please follow and like us: