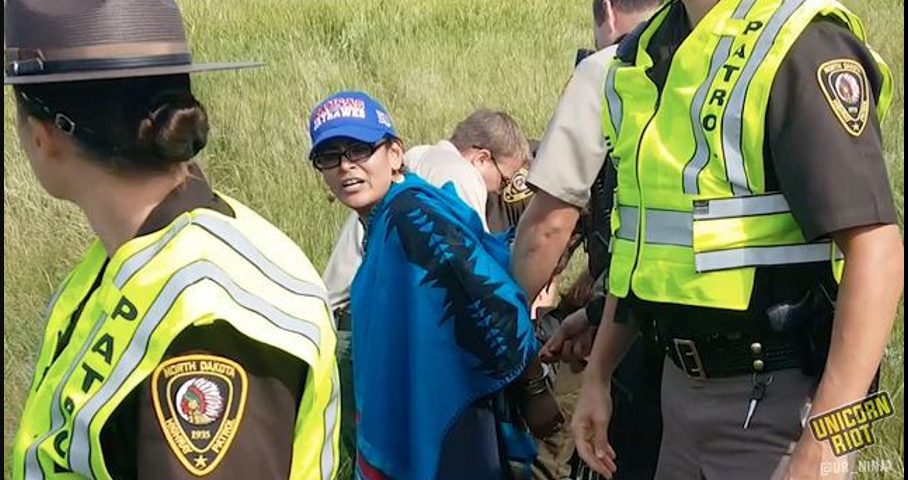 #NoDAPL water protector Red Fawn Fallis was sentenced July 11 to 57 months in prison by a federal judge in North Dakota. She was given 18 months’ credit for time served prior to trial, and will have three years of probation supervision after her release. She and her family await news of where she will serve time, possibly in Arizona.

Red Fawn had previously accepted a plea agreement that included two federal felony convictions — civil disorder and possession of ammunition by a previously convicted felon — in return for dropping a more serious weapons charge that would have carried a minimum prison sentence of 10 years.

Her charges resulted from the Oct. 27, 2016, militarized police attack on the 1851 Treaty Camp near Standing Rock, directly in the path of the Dakota Access oil pipeline (DAPL). Red Fawn was tackled by several cops, who then claimed that she had a gun and fired it during that time.

As it turned out, the gun belonged to Heath Harmon, a paid FBI informant who had weaseled his way into Red Fawn’s life as her boyfriend and into her family’s good graces. Many believe this spying was done to try and obtain information through Red Fawn about actions and plans at the #NoDAPL camps. Red Fawn, who is from the Pine Ridge Reservation and also Denver, Colo., comes from a proud line of American Indian Movement activists.

Red Fawn understood clearly that there could be no justice for an Indigenous woman in any court in North Dakota. Her lawyers were told they could not introduce evidence at trial about relevant subjects such as treaty rights and the FBI informant who targeted Red Fawn and likely planted the gun at the time of her arrest.

The prosecution refused to produce important evidence that might have cleared Red Fawn. As a result, she accepted a plea deal that would eliminate the more serious weapons charge, out of concern that otherwise she would be found guilty and sentenced to more than 10 years.

As an Indigenous woman, Red Fawn is being severely penalized for daring to defend treaty rights, protect the water and stop the Dakota Access Pipeline. Since the beginning of settler colonialism, Indigenous women have been viewed with utter contempt, and their countless efforts to defend their land and families have been harshly repressed and punished.

While the #NoDAPL encampments began at Standing Rock more than two years ago, the court cases are continuing to snake through the courts. Indigenous defendants are being hit with the most severe charges and prison terms. Dozens more water protectors still face state charges, and several face federal charges that carry the potential of spending decades in prison if convicted.

Michael “Little Feather” Giron was sentenced on May 30 to a 36-month federal prison term for “civil disorder.”

Michael “Rattler” Markus awaits sentencing on Sept. 27. Under his plea agreement, there will be a joint recommendation of 36 months in prison for “civil disorder.”

Dion Ortiz is awaiting sentencing on Oct. 22. Under his plea agreement reached on July 17, prosecutors will recommend up to 36 months in prison for “civil disorder.”

James “Angry Bird” White entered into a noncooperative plea agreement in July for a sentence of time served plus 12 months of home confinement for “civil disorder.”

The cops and federal government intended all their brutality and arrests to put a damper on water protectors during the time of the widespread international effort to stop the Dakota Access Pipeline. Water protectors were arrested by the hundreds, attacked by dogs, sprayed with mace and pepper spray over and over, hit with concussion grenades and rubber bullets, seriously injured, denied medical care, strip-searched and placed in dog cages upon arrest.

The militarized attacks against the camps at Standing Rock were part of a centuries-old history of government repression directed against Indigenous people who defend their lands.

Once again, that repression has backfired. Resistance continues to grow. From British Columbia to Louisiana, from the nation of Colombia to Minnesota, pipeline fighters and water protectors continue to spring up everywhere. Throughout Turtle Island, Indigenous people and allies rise together to say, “Water Is Life!”

Part of supporting that resistance is to ensure that our political prisoners are never forgotten or left behind. For updates and information about how to contact Red Fawn and other #NoDAPL political prisoners, go to tinyurl.com/y8qlcb23/.