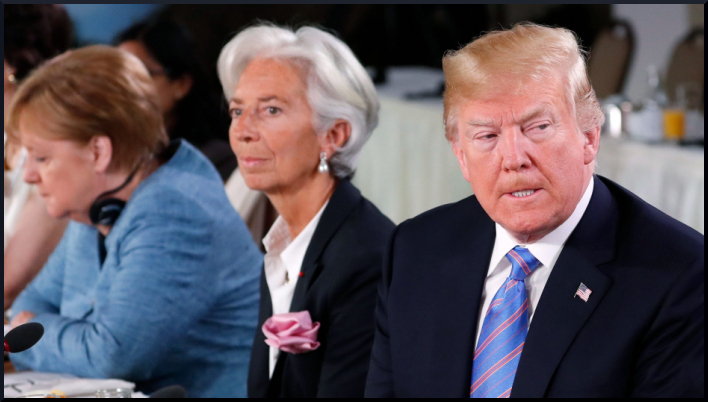 The recent imposition of a 25% tariff on steel imports to the United States and a 10% tariff on aluminum from Canada, Mexico, and the European Union follow the earlier imposition of these tariffs on the rest of the world, and even earlier tariffs on solar panels and washing machines aimed at China and South Korea—all by the U.S. Donald Trump administration.

Trump has also threatened to place heavy tariffs on automobiles and parts imported from abroad, and on numerous industrial and technological products from China. He has also re-imposed economic sanctions on Iran, and put new sanctions on Russia.

Understanding Trump’s intentions is no easy matter.  He seems motivated more by sheer bravado than rational thought. Trump’s rhetoric often appears to be aimed at playing to his base rather than reflecting any meaningful thoughts about the future. “Make America Great Again” and “America First” are the shibboleths that appeal to his populist supporters.

At the same time, these notions do speak to the interests of a section of the U.S. capitalist class that is falling behind in global capitalist competition. They are supported by a layer of trade-union leaders who hanker for a return of smokestack America with its millions of well-paid manufacturing jobs. These bureaucrats seek to tie the future of U.S. workers to the “success” of their “own” capitalist corporations and their twin parties, the Democrats and the Republicans, as opposed to furthering the independent organization of workers to challenge the root cause of the problem—the fundamental, for-profit-only operations of the capitalist system.

The United States no longer has the only powerful economy in the world. As global competition relentlessly heats up, and the rate of profit tends to fall, the methods of past times don’t work. For many years after World War II—years of American economic hegemony—free trade was the battering ram to force open foreign markets to cheaper U.S. goods. This was likewise the policy of the U.K. during the height of the British Empire, before World War I. In general, capitalist nations operating with the highest, or most advanced levels of technology tend to be “free-traders” while their weaker competitors are “protectionists.”

Trump’s repeated reference to “many jobs, good jobs” appears to mean the re-creation of jobs that have largely disappeared in the United States, such as coal mining, steel making, and auto manufacturing jobs. Most of these have been lost to automation in auto and steel plants. The U.S. makes about as much steel now as in 1960, but with 20% of the previous labor force. Car manufacturing automation is similar.

Underground coal mining is foul, lung-destroying work that hopefully will never return. But the jobs have disappeared only because they are less profitable in the U.S. and worldwide, and not out of any concern on the part of the coal magnates for the health of the miners. Unfortunately, the labor bureaucracy, tied to capitalism hand and foot, prefers to advocate for capitalism’s most polluting jobs rather than challenge the entire deadly energy system in a fight for a just transition that would guarantee all fossil-fuel workers new jobs at union wages in a 100 percent sustainable and nationalized energy system.

Working people have no interest in trade wars. We simply end up bearing the cost.

The United States produces just below 60% of the steel it uses, while importing the rest from 85 other countries. Canada provides 17% of the imports. Other sources of steel to the U.S. include Brazil 14%, South Korea 10%, Mexico 9%, Russia 8%, Germany 4%, and China 2%. If foreign steel and aluminum become much more expensive as a result of the tariffs, U.S. manufacturers who use such materials will no doubt respond in order to protect their profits. Their options include striving even harder to keep wages low, passing on the price rises to consumers, or even closing down U.S.-based manufacturing plants.

Of course, Canadian, Mexican, and European capitalists have all responded with tariffs on American goods. In this way, too, U.S. workers lose jobs. But workers in Canada, Mexico, and Europe will likely face similar problems—higher prices and the loss of more jobs than tariffs can possibly create.

Global capitalist competition is a completely unavoidable aspect of the system of private profit. As competition results in new innovation, and automation increases the rate of profit for the innovator temporarily, these gains are offset again by the rapid adoption of the new technology by competitors and the resulting fall of profit rates.

In their desperate struggle to fight the falling rate of profit, capitalists try to reduce costs by attacking trade unions and workers’ rights, by attacking pay and benefit levels, by attacking general social benefits such as education, medical, and pension benefits, by refusing to accept any responsibility for the massive environmental damage caused by cutthroat capitalist competition, and by transferring production to low-wage, unregulated areas both within and outside their own countries.

In decades past, the volatile world capitalist system sought to mitigate its inherent contradictions through organizations like the World Trade Organization (WTO). In this context, the leading representatives of the world’s most important corporations hammered out comprehensive agreements that sought to meet the needs of all the ever-competing capitalists. Needless to say, the stronger capitalists, like the ruling rich in the United States, always had the upper hand because the U.S. market was the largest in the world.

Nevertheless, each sector of capital understood that one or another competitor had an edge in specific commodities that were traded on the world market. Their objective was to balance their various needs with deals. A modicum of French wine was allowed into the United States, for example, while a certain amount of U.S. products were allowed into France under reciprocal conditions.

NAFTA (North American Free Trade Agreement) was in truth, despite its name, a mass of literally thousands of separate negotiated agreements between the ruling elite of Mexico, the U.S., and Canada. These included all kinds of protectionist measures for weaker U.S. corporations, and the same for those in Mexico and Canada.

In the face of intensified cutthroat competition between capitalist powers, the old rules of the game are incapable of resolving the growing contradictions of the system. Trump sounded the alarm for the wing of the U.S. capitalist class whose interests he sees himself as representing. Ignoring the delicate or fragile balance that has been hitherto established by his predecessors, he proposes to upset the world capitalist system’s apple cart to advance the interests of his favored elites.

When Trump gifted $1.5 trillion in tax cuts to the entire ruling class, there were no complaints. But when Trump departed from measures that benefit the broad sectors of the ruling rich, he faced serious opposition internally, not to mention from the potentially wounded lesser capitalist nations. Hence Canadian Prime Minister Trudeau, as well as France’s Macron and Germany’s Merkel, cried foul and collectively threatened to retaliate.

The world’s working people have no interest in this potential world conflagration. In the end, when capitalists win, workers lose—a fundamental law of the capitalist system that has been verified many times over the past decades. The common interest of workers lies in defending working people everywhere against all the onslaughts of capital. This means international solidarity on every front, from united worldwide efforts to organize workers into powerful unions to united opposition to capitalist wars and capitalist destruction of the environment.

There is no such thing as peaceful and/or regulated competition among capitalist nations. No self-respecting capitalist is in business to be the world’s “nice guy.” There are only winners and losers in this deadly game of production for private profit. Donald Trump simply tore the mask off the brute face of a predatory system in decline. Justin Trudeau plays the same game as Trump on the world scene and makes sure that everyone knows that Canadian capitalism can bare its own claws in the profit game.

Reliance on any of these representatives of the world’s elite to advance the interests of working people is sheer folly. Breaking with their corporate parties in the political arena is the beginning of a serious challenge to capitalist prerogatives. But only the abolition of the capitalist system itself at the hands of the vast majority of working people can ensure a permanent end to capitalism’s endless trade wars and its real wars that plague all humanity.