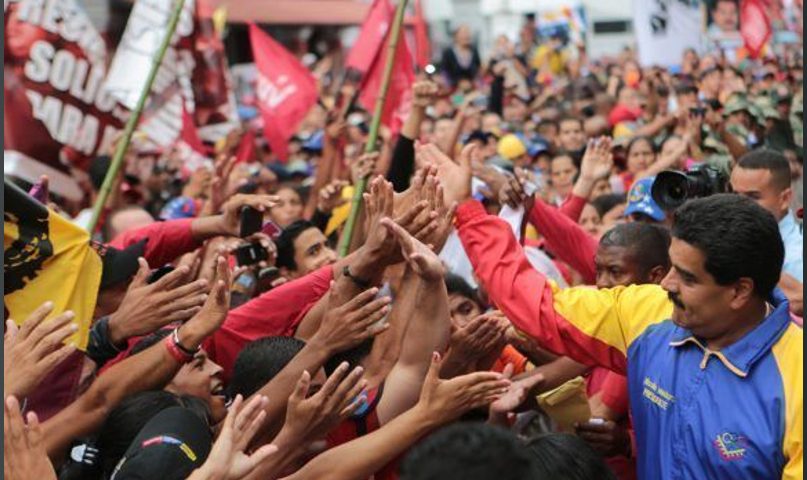 Previously published in ALBA Movimientos / The Dawn News / May 8, 2018 and TeleSUR

Next May 20 the presidential elections will be held in the Bolivarian Republic of Venezuela in a context of a multi-dimensional war organized by the empire. The Venezuelan people are suffering from a terrible economic embargo, diplomatic isolation, with paramilitary deployments in their territory as part of this strategy to overthrow the legitimate government of Nicolas Maduro. This is why on May 20 Venezuela will give a new battle, in the electoral field we are sure that chavismo will be victorious and it will ensure the continuity of Nicolas Maduro, but in the international front there will be continued efforts to try and delegitimize this process and they will put all of their power against the revolutionary government.

From Social Movements of ALBA we call social movements in Our America and the world to carry out actions, concentrations, activities, etc. in solidarity with the Bolivarian Revolution and Nicolas Maduro. Social Movements of ALBA will be receiving pictures, videos, texts and all material expressing solidarity with Venezuela and Nicolas Maduro to help us wage the battle for ideas in social media and our people’s media.

The following is the statement from the campaign:

VENEZUELA HEART OF OUR AMERICA: Maduro YES Trump NO

In these moments in Venezuela a good part of the destiny of Latin America and the Caribbean is played. All the artillery of the conservative sectors -in particular the communication- is focused on delegitimizing the Bolivarian Revolution and the government of Nicolás Maduro, who managed to won politically to an “opposition” that no longer knows how to fulfill the mandates of their imperial leaders.

The Venezuelan people and their revolutionary government neutralized the fascist violence with more democracy and participation, as demonstrated by the Constituent Assembly and the electoral processes of 2017, which once again positioned Chavismo as a faithful representative of popular interests, despite the nefarious economic blockade that it is exercised against this country, and the fourth generation war against it.

While Venezuela resists this war, the elites of the continent do not stop defamatoryly defacing the government of Nicolás Maduro, the well-known cartel of Lima, it is nothing more than a group of mobsters, government usurpers in some cases, repressors of their people in others, little thieves in so many others, or directly all things at once in many. We are talking about of the golpista Michel Temer; of the Honduran Orlando Hernández and his vote stealing; of the Santos that does not comply with the peace agreements; del Peña Nieto who finished delivering Mexico; Macri of adjustments and political prisoners.

All these looters from their own villages obey the White House and the supremacist and overtly imperialist government of Donald Trump; a nefarious person who openly bares the vision of the American elites in their process of decadence as imperial hegemony. Their xenophobic, sexist, racist, colonialist and militarist speeches generate admiration in their puppies of the Lima and OAS cartel, while they lie again and again about Venezuela and Chavismo. It is the hatred of those who poison the people who measure the achievements that have been made. That’s why we say TRUMP NO.

In difficult moments like the ones we are going through throughout the Great Homeland, where the friends and allies of yesteryear, from the victorious times, jump the fence to criticize from the abstract purity, the popular movements of the continent continue shoulder to shoulder defending the Bolivarian Revolution.

As we have been doing in recent years, every time the storm rages, the movements, organizations and peoples aware of the battle come out with more strength and willingness to exercise internationalist solidarity and the diplomacy of the peoples.

The peoples of Our America and the world continue to raise the flags of Comandante Chávez, we are anti-imperialist and we stand in solidarity with the Venezuelan people and we defend the legitimate government of Nicolás Maduro. It is for all this that we launched the campaign “Venezuela Heart of America: Maduro SI, Trump NO”, and we call on all movements, organizations and groups to join. Peoples’ movements across the world celebrate the victory of Nicolás Maduro