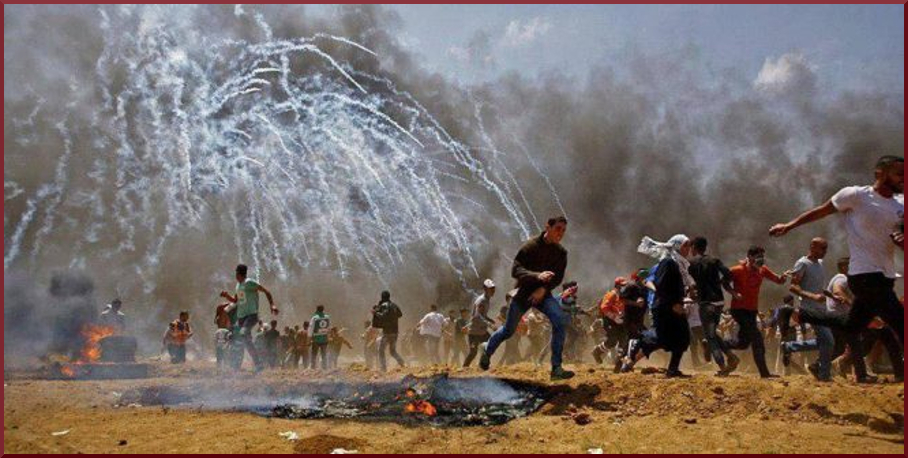 For more than 70 years, Palestinians have endured the crimes of ethnic cleansing, dispossession, disenfranchisement, destruction, and death at the hands of apartheid Israel, with the unqualified backing of the United States, as well as the tolerance of this ongoing trampling on humanity and justice by the international community.

As Israelis celebrate the May 14, 1948, anniversary of the establishment of their state, Palestinians on May 15 mark the Nakba (“Catastrophe”), the violent ethnic cleansing that forcibly expelled more than 800,000 Palestinians from more than 500 towns and villages that were destroyed or abandoned and annexed.  The 1967 occupation drove out thousands more. Today, six million refugees live in the Occupied Territories of Gaza, the West Bank, Jerusalem and the Golan Heights, in squalid refugee camps in adjoining countries, and in the diaspora dispersed worldwide. Those who remain in Israel live as second-class citizens.

Palestinians in Gaza have especially suffered.  They struggle to live in the world’s largest open-air prison without sufficient access to the basics of survival – food, water, health care, electricity, work, and the freedom to come and go.  Israel has maintained this ongoing Nakba in the expectation that new generations of Palestinians would despair and abandon the dream of return. It is clear that Palestinians will not capitulate.

Despite the crippling siege, since March 30 Gazans have courageously initiated the Great March of Return. Thousands of Palestinians have held unarmed protests at Israel’s apartheid wall to demand the right to return to their homes as guaranteed by international and human rights laws and conventions.  The Israelis have systematically met the protesters with live sniper fire (using weapons supplied by the U.S.), rubber bullets, and gas. As of Monday morning, May 14, at least 90 Palestinians have been killed and close to 10,500, including children, have been wounded. The slain Palestinians were between the ages of 14-42 and the majority were young men in their 20’s.  The snipers had no hesitation in targeting journalists and Red Cross rescuers.  This is a massacre, and it is anticipated that many more will die and suffer terrible injuries in the demonstrations culminating this week.

The Trump administration has given the green light to the right-wing Zionist government of Israel by declaring that Jerusalem is the capital of Israel and by moving the U.S. embassy there.  This has led to increased repression for the Palestinian people, ranging from more arrests of children like Ahed Tamimi to the massacres of unarmed protesters in Gaza.  But this joint U.S./Israeli aggression does not end with Palestine: In recent days, we have witnessed major Israeli missile attacks on Syria following U.S. missile attacks.  These are clearly also aimed at Hezbollah, which recently won an election in Lebanon, and they are aimed at Iran. The U.S. withdrawal from the Iran nuclear agreement, formally known as the Joint Comprehensive Plan of Action, must be seen in this light.  These moves threaten to throw the entire Middle East into one of the most destructive wars the world has witnessed.

Palestinians and their supporters have organized demonstrations nationally and internationally.  It is essential that we all do what we can to demonstrate solidarity during this period of escalating attacks on the Palestinian people.

These are the actions we call for: