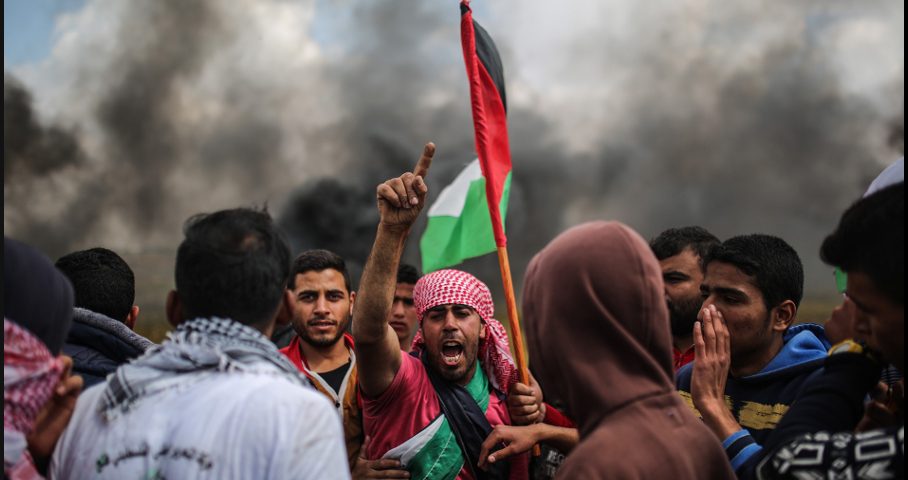 by Cassia Laham, originally published on FightBack! News, May 11

May 15, 2018 marks the 70th year since al Nakba, or the Catastrophe, in Palestine. The Nakba refers to the day in 1948 when hundreds of thousands of Palestinians were forced out of their homes and off their land by Israeli troops, precipitating the creation of the colonial, apartheid state of Israel. Since then, the Israeli government and its military has continued their attempt to squeeze Palestine into submission. But this attempt has been futile, as recent events in Gaza have illustrated.

Palestinian protesters in Gaza have been gathering outside of the Israeli border fence to protest for their Right of Return, a reference to their inalienable right to return to the homes and land they were forced from. Over 2 million residents of the Gaza Strip (the world’s largest open-air prison) are refugees who cling desperately to the hope of return. It is this hope that keeps thousands of Palestinians protesting at the border fence, despite the scores that have been killed by Zionist forces since the recent wave of protests began March 30.

On May 15, it is expected that thousands of Palestinians will gather at the border fence and attempt to march through it and break through to the other side, in what may be the catalyst that sparks the fire of a new intifada. Those who were born under occupation, raised by behind checkpoints, and trapped behind blockades and apartheid walls are fighting back! And those people deserve our praise, our respect, and our support.

In the U.S., it is our duty show solidarity with this Palestinian resistance. We live in the belly of the beast, without whom Israel would not be able to commit their atrocities against the Palestinian people. The U.S government sends billions of tax dollars to the Israeli government, provides weapons and technology to the IDF and Zionist settlers in Palestine, and even targets Palestinian activists, like Rasmea Odeh and the Holy Land 5, here at home. We must resist these policies that serve the interest of the ruling class only at the expense of everyone else, from here to Palestine. We must resist American imperialism, which wreaks havoc on innocent people in every nation it touches.

We call for a show of solidarity with the people Palestine attempting to return home – may they continue to resist, as we do here, and may they see victory in their lifetime. Free Palestine!