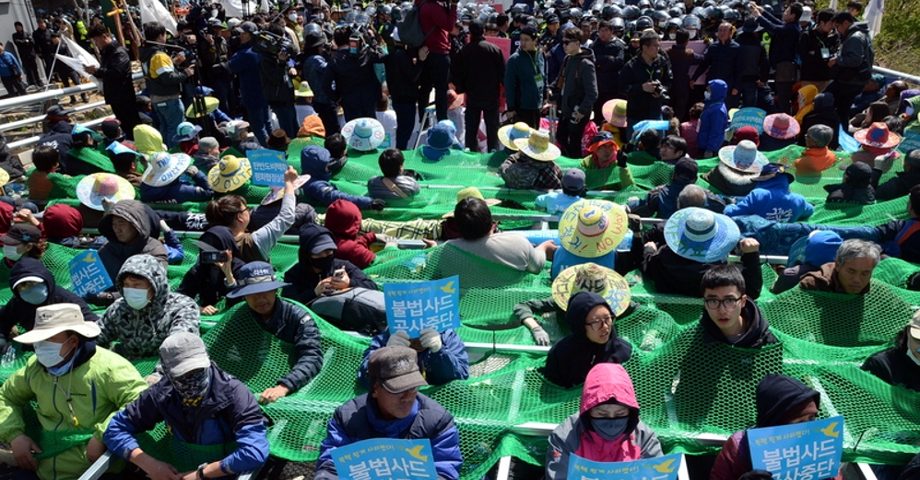 It has been nearly one year since the United States Forces Korea and the South Korean Defense Ministry first forced in key parts of the THAAD missile system using brute force against the residents who were peacefully blocking the road to the deployment site. Not much has changed, however, since the early morning of April 26, 2017. The struggle against the THAAD continues as construction for the base hosting the missile system continues. On April 23 of 2018, South Korean police forced 200 residents of Soseong-ri and anti-THAAD activists to disperse from their peaceful protest to make way for additional construction material and equipment to enter the deployment site of the THAAD missile system. Protesters mobilized on the night of April 22 in anticipation of construction material entering the THAAD base. They had set up to block Jinbat Bridge, which is the only road that leads to the military base. The residents and supporting peace keepers linked themselves to each other by wrapping large nets around their bodies. The protesters endured through cold rain overnight as well as confrontation with the police. By the morning the South Korea’s Defense Ministry had deployed over 1,000 riot police to force the dispersal of the local residents and peace activists protesting on Jinbat Bridge. Over 15 protesters sustained some form of injury as a result of excessive force used by the riot police. At least three of them had to be taken to the local hospital. Less than two weeks ago, on April 12, the Defense Ministry deployed 3,000 riot cops to forcibly disperse protesters waging a peaceful sit-in protest on Jinbat Bridge and clear a path for construction material and equipment to enter the THAAD base. The residents and members of the The Stop THAAD Peace Committee are also questioning the Defense Ministry’s decision to move forward with completing the construction of the facilities on the THAAD base so close to the the summit meeting between South and North Korea. Last week, the “Stop THAAD Peace Committee,” which is made up of six organizations that have been opposing the THAAD deployment, released a statement demanding an end to the construction of the THAAD base and an official promise “to withdraw the THAAD in the event of a peace treaty being signed.” The statement questioned whether the attempts by the U.S. and the South Korean Defense Ministry to complete the construction are a ploy to make the base permanent before a peace treaty is established on the Korean Peninsula. The residents and peace keepers are also questioning the purpose of keeping the THAAD system, particularly after North Korea has announced that it is suspending nuclear tests and showing interest in negotiating for denuclearization of the Korean Peninsula. In light of North Korea demonstrating its commitment to the upcoming peace talks with South Korea and the United States, the Stop THAAD Peace Committee has called for all construction on the THAAD base be suspended at least through the summit meetings. Throughout this month, many Korean people have been looking forward to the prospects for permanent peace on the Korean Peninsula. Meanwhile, the U.S. and South Korean governments continue to ignore the concerns of the Soseong-ri residents and continue to force the completion of the military base for the THAAD missile system. In the minds of the Soseong-ri residents and the Stop THAAD Peace Committee members, this is a direct contradiction to the South Korean government’s vow to work towards building the conditions necessary for the establishment of a permanent peace treaty.

ZoominKorea is an online resource that progressive minded individuals and groups interested in Korean issues as well as other U.S.-based media can access for timely updates on major news stories related to Korea, particularly exploring topics of the fight for democracy in South Korea as well as peace and reunification on the Korean Peninsula.