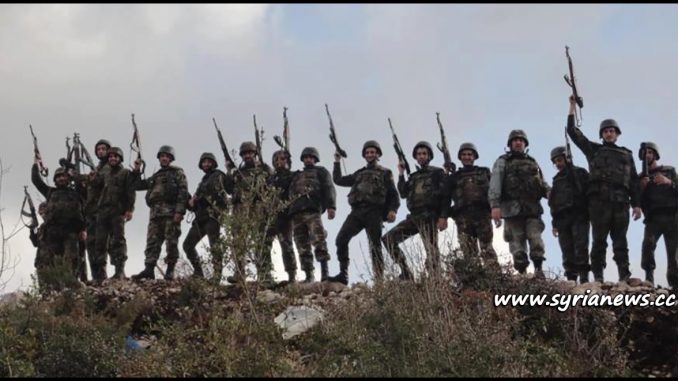 To the people of Syria:

In fact, Syria taught the west a lesson. Dear Syria, you already have won this war at the moral side. And your splendid army has proven to be of iron and fire at the battleground. Your people are so firmly committed to your nation that no enemy from outside will succeed, just as Cicero had stated, about 2000 years ago!

Still, it is very important to name the real enemies, mainly the western imperialistic mass-murdering genocidal monstrous terrorists: Trump, Merkel, Macron, May, and their partners, Erdogan and al-Saud (I do not forget Qatar, though).

We in the west, EU and USA, Canada and Australia, are obliged to always, on a daily basis, point our fingers at those who claim to govern us for our best by exporting genocide, devastation, and death to the world, mainly to the Middle East and Africa. And we must never forget that these terrorists in white collars are still just the powerless minions, the servants of the real powers, the men in black suits who rule this world via their computers, their (stolen) money, their media, their corporations. We can name them: Rothschild plus their muppets like Kissinger or Brezinsky, Warburg, Morgan, Goldman-Sachs, Rockefeller, the “Queen” of Britain (literally owning a large number of peoples), and in Germany Springer, Mohn, Quandt, and others – to name a few.

We – the people in the West – are obliged to overcome and finish these terroristic regimes in the name of peace and justice. It is in our hands to end the terror and to create a better international order, for our children and for yours. It is all up to us, we have to do it.

But we failed in the past and we are failing now – not because we are weak and the regimes are strong, but because the vast majority of us is deliberately complicit with the terrorists as long as this would pamper their comfort, their ego-driven lifestyle. Do you really think that the Germans do care for you? NOT AT ALL, neither do the people in UK, France, USA. The majority of the people in the West appear to be dumbed-down, deliberately ignorant, cold-hearted monsters who do care nothing for the horror they help to impose on others to keep their lifestyle.

This, to me, seems to be the real issue.

The terrorists you in Syria, unfortunately, are exposed to are not the cause but the result. They had been made by the very same monsters I named above (and their predecessors in office, Obama, Sarkozy, Hollande, Cameron). They originate not from any problem inherited in the Syrian society but from Western greed. Therefore, the western-made terrorism, which is just a tool of our imperialism, will never end before we, the peoples, have not taken back our countries to overthrow the imperialistic regimes in Washington, Berlin, Paris, London, and Tel-Aviv (never forget the real masters behind the curtain, the elephant in the room no-one is allowed to name).

As we fail, you have the utter right and need to defend yourself, your lovely nation, your great people, your homes and your families. And, by doing so, you always defend the values of a truly human heart, of humanity, of mankind, for all of us, whether we stand with you or aside (which means at the side of the terrorists).

Syria has taught the whole world a lesson. Syria will be victorious, by her own strength and faith, and by the tremendous support of her real friends (Iran, Hezbollah).

Syria will prevail, by the sacrifice of her people. We, your supporters in the West, are all tremendously grateful we are allowed to stand with you, although we actually do not sacrifice anything but time.

Syria, the nation that gave civilization to the world, will be victorious, and the west will downfall (hopefully soon and forever).

Dear Syria, I send all my love and utter respect to you and your wonderful people.

Stefan Heuer, born in 1964, is a German historian and political scientist.