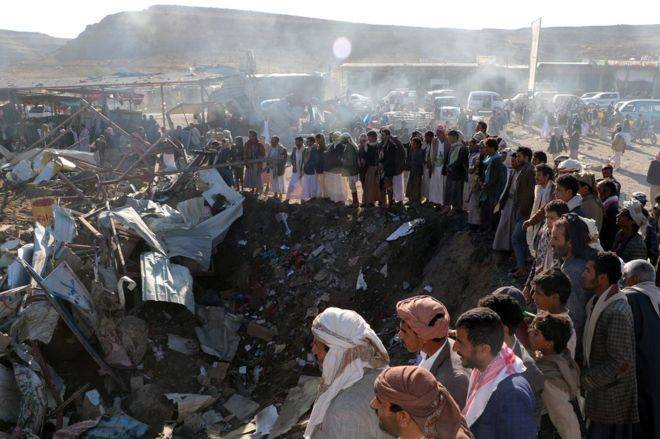 Saudi airstrikes and war crimes in Yemen have not slowed down all week. On Nov. 1, attacks on a market in Saada resulted in nearly 70 killed and many wounded. On Nov. 3, raids targeted homes in the same province, killing seven people, most of them women and children.

Airstrikes from the U.S.-backed Saudi coalition injured another 10 children, two of them critically, in al-Jouf province just north of Saada. At least 15 strikes hit various areas of Midi and Taiz today in the course of a few hours. Additional attacks in Saada province struck a farm, killing and destroying livestock.

Yemen’s resistance has drastically increased their military capabilities as a defensive tool against this type of aggression. This includes manufacturing Yemeni-made long-range ballistic missiles and anti-air sniper rifles. The Sana’a-based forces have also increased maritime and special operations capabilities.

In retaliation for the ongoing airstrike campaign and siege, Yemen’s resistance struck the King Khalid International Airport in Saudi Arabia with a long-range ballistic missile the morning of Nov. 4. Mainstream news outlets like CNN quickly (and incorrectly) reported that Saudi forces had intercepted the missile. Video from the ground proves otherwise. Flight data also shows that the event impacted travel and delayed flights for hours.

War crimes include famine and cholera

In early October, the United Nations re-added Saudi Arabia along with their coalition to a censure list due to their devastating military and airstrike campaign, which explicitly targets Yemeni civilians, hospitals, markets and homes.

Last year, the U.N. removed Saudi Arabia from this same list after facing financial extortion and other threats from Riyadh. Apparently, this censure list holds no significant value because the Saudi-led airstrikes and war crimes in Yemen have not stopped.

Well over 10,000 people have lost their lives from air strikes or military operations since Saudi Arabia and allies launched their war against Yemen in 2015. Tens of thousands more have been killed as a result of the ongoing Saudi-imposed siege and blockade.

Due to restricted imports, nearly 7 million Yemenis face famine and 17 million face food insecurity. The lack of access to medical equipment and sanitation supplies has triggered a globally unprecedented cholera outbreak claiming the lives of over 3,000, with numbers reaching 1 million infected by the end of the year. The siege also restricts government salaries for health care workers, sanitation workers and other public jobs.

Tigrayan militia sponsored by the US attacks Ethiopia and Eritria, triggering civil war and an international war... on Stop the Wars At Home and Abroad: https://unac.notowar.net/2021/07/27/the-tplf-attack-on-ethiopia-contains-the-accumulated-evil-of-the-war

Commemorating the day Korea's separation was permanently enabled in the fog of war : Stop the Wars At Home and Abroad: https://unac.notowar.net/?p=12352

Daniel Hale was sentenced to 45 months in prison today. Far too long, and yet, a slap on the hand for the government which was hoping to lock him up for 10 years on Stop the Wars At Home and Abroad: https://unac.notowar.net/2021/07/26/daniel-hales-letter-to-the-judge-who-will-decide-his-sentence

Daniel Hale was giver 45 month (almost 4 years) in prison for doing the right thing. There is no justice in the US. The war criminals who have killed millions are not in jail but a young man with morals and courage is.