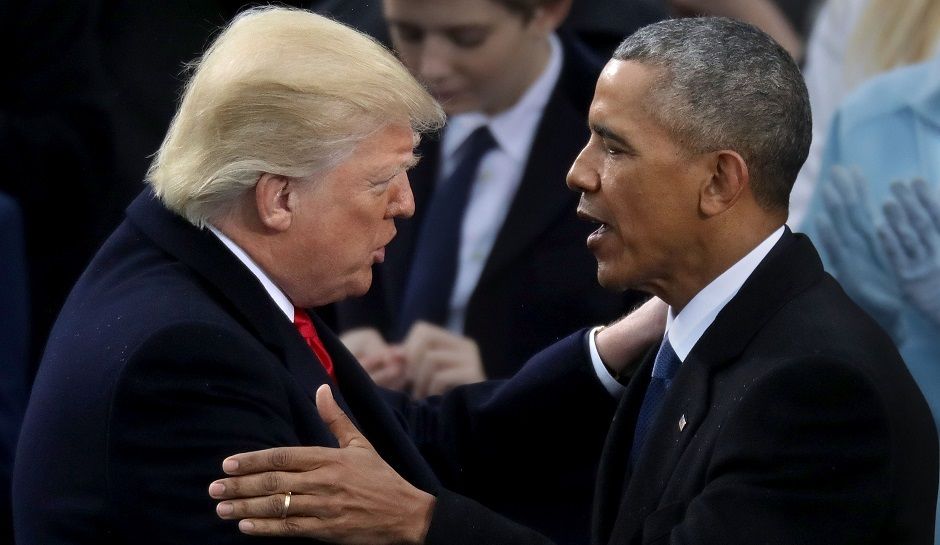 What are we to make of U.S. President Donald Trump’s extremely hostile attack on the Joint Comprehensive Plan of Action, usually referred to in the West as the “Iran nuclear deal”?

The president is required by Congress to certify every 90 days that the Islamic Republic of Iran is in compliance with the agreement and that the deal is beneficial to the United States. On Oct. 13, Trump refused to issue what would have been his third certification. However, he stopped short of pulling the United States out of the agreement, instead lobbing that political powder keg over to a deeply divided Congress.

If there were some question about Iran’s compliance with the JCPOA, perhaps there could be a rational discussion about Trump’s position.  But there is no such question. The International Atomic Energy Agency, known as the United Nations’ nuclear watchdog, says that Iran is in total compliance with the agreement. So does the European Union, a signatory to the deal. So did the leaders of Britain, France and Germany in their response to Trump. So does U.S. Secretary of State Rex Tillerson, bluntly contradicting his own boss.

It would be easy to dismiss Trump’s rants and raves as the product of a demented mind, except for one thing: He is motivated by the same hostility to the Islamic Republic as is the entire U.S. ruling class, as represented by both the Republican and Democratic parties.

What is the source of this unrelenting hostility? Is it a real fear of a military attack by Iran on the U.S. or its allies? Does it go back the U.S. embassy hostage crisis of 1979? Is it part of some modern-day crusade against Islam?

I think the answer is much simpler: It’s that Iran is a powerful obstacle to the U.S. goal of achieving political, economic and military hegemony in the oil-rich Middle East.

In his Oct. 13 speech, Trump leveled a wide range of accusations against Iran: developing ballistic missiles, supporting resistance movements like Lebanon’s Hezbollah, providing critical support to the embattled government of Syrian President Bashar al-Assad. However, as much as Trump may hate these actions, they do not fall within the framework of the JCPOA. The truth is that President Barack Obama was just as hostile to Iran as is Trump. But Obama agreed to the nuclear deal because he knew that the United States had reached a crossroads in its dealings with the Islamic Republic. It had imposed, or succeeded in forcing others to impose, a wide range of punishing sanctions against Iran – so many, in fact, that it was running out of options. A military strike seemed to loom ever larger as the Final Solution.

But 2015 – or 2017 – would be a bad time for the U.S. to start another major war in the region. It was and is bogged down in multiple unwinnable wars across the Middle East and North Africa. Taking on a military power like Iran – and, more importantly, its 82 million patriots, would not be a wise move, and Obama knew it. So he bought some time with the nuclear deal. The goal was not to stop Iran’s nonexistent pursuit of nuclear weapons, but to postpone the decision to launch a new war.

Trump does not seem so wise. He’s more like a madman who could wake up one morning and start a war just because he felt like it.

Fortunately, there are other more powerful forces in the U.S. that are more rational. Not kinder, not more compassionate, not more just – just more rational. And they know that a war with Iran would not be winnable. Pressure from these forces is probably why Trump hasn’t yet tried to pull the U.S. out of the nuclear deal.

What does all this mean for Iran? For at least part of the answer, it might be good to look at the example of Revolutionary Cuba.

The Cuban people have not had a single day of peace since they overthrew the brutal dictatorship of Fulgencio Batista in 1959. The colossus to the North has done everything it could to try and undermine the Cuban government and destroy its socialist system. Yet, 11 million Cubans have been able to convince its powerful and deeply hostile Northern neighbor that invading the island would be too painful to attempt.

Why? Because the Cuban people have made it absolutely clear that they would resist with every drop of their blood. They do not have a large army, they do not have overwhelming firepower and they certainly do not have nuclear weapons. What they have is the will to resist. And that has proven to be effective.

There is no doubt that, faced with a military attack by the United States, the vast majority of Iranians would rise to defend their country and their government. Whatever political disagreements may exist, Iranians are patriots. The U.S. government knows this, and that knowledge is a tremendous deterrent to military action.

Nevertheless, Iran should not have to stand alone. And it doesn’t stand alone. Millions upon millions of people around the world admire Iran for having been able to survive the hostility of the U.S. Empire. Iran was the first country to nationalize its oil, under the leadership of the great Prime Minister Dr. Mohammad Mosaddegh. The Iranian people carried out the last great revolution of the 20th century, overthrowing the hated U.S.-backed Shah in 1979. Iran has steadfastly defended the principle of self-determination for the Palestinian people and other oppressed peoples throughout the region. These actions have won it great international respect.

One thing that is missing is a strong people’s movement within the United States that can oppose U.S. wars and threats of war. That movement still exists and has begun to awaken from years of slumber. In fact, it has been rudely woken from that slumber by the election of a billionaire, white supremacist, warmonger as president.

Regardless of what the U.S. government does in relation to the nuclear deal, we must have faith that the combined forces of Iran, its political allies and the mobilization of progressive movements around the world – especially in the United States – will be able to hold back the threat of war.

In the final analysis, international solidarity will prove more powerful than any weapon of war.

*Phil Wilayto is Editor of The Virginia Defender newspaper and author of “In Defense of Iran: Notes from a U.S. peace delegation’s journey through the Islamic Republic.” He can be reached at .